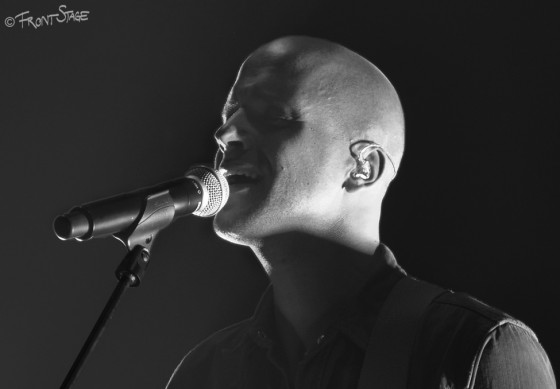 It was actually Peter (our dear Swedish photographer) that asked to cover this concert. But then I got the interview with Milow, listened to North And South, fell in love with the album, met Milow, was beyond charmed by him and then I was attending the concert. All of this happened in the span of four days and now, four days later, I’m still pretty much in love with Milow.

The intimate concert he held at Nalen managed to clarify what I suspected after my interview with him: that Milow is an ARTIST, as in a person that lives, breathes and loves music (with a very busy European tour, his own label and being his own manager, I would say so!) and it comes across on stage.

There wasn’t a person that attended the concert that didn’t leave the venue with a crush on Milow. The best way I can prove this claim is with my dear assistant Dani — who came along to the concert because it was free (heh), but after it didn’t wait a minute before looking for Milow on Spotify. Same thing with the YAMmies that won tickets to the concert. Four of them hadn’t really listened to Milow before (again, they pretty much came because it was free), but after the concert they couldn’t but praise his music and stage presence.

How could they not when Milow was beyond amazing on stage? Singing repertoire from all of his albums — of course the greatest highlight was when he sang his very popular cover of Ayo Technology. Many in the crowd were singing along to songs from his new album such as the lovely You And Me (In My Pocket) and Little In The Middle.

Milow managed to grab the audience and take us along on a lovely music journey. He slowly built the tension up and then left us simmering in tranquility as he sang Born In The Eighties and the tragic yet beautiful Stephanie. In all, a lovely concert thanks much to Milow’s songs (with simple yet engaging lyrics), his charisma and the crowd. All of the three synced in perfect harmony and resulted in one of the best concert experiences I’ve had this year.

All pictures by Peter Andersson/Frontstage Photo