The very talented comedy group Klungan and  the indie band Säkert! have roots in the northern parts of Sweden, which explains the name of the show, A Night for Homecomings, a show divided in two acts of comedy and music. Ironically, they played Stockholm where homecoming for Christmas isn’t as celebrated as in other parts of the country.

Klungan first set the mood with their sarcastic and satirical comedy. This was a perfect start before the concert as Annika Norlin entered the stage together with her band Säkert! in front of an all most sold-out Circus arena. The mood was laid back and comfortable, even though the venue was quite big and holds about 1500 people, the concert felt personal and cozy. 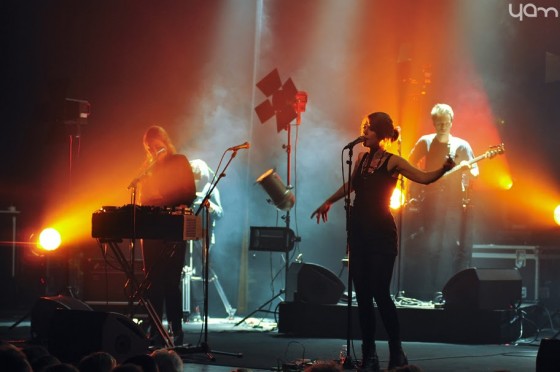 Säkert! plays a type of popular indie music with playful — but serious — lyrics with satiric undertones. The band played both old and new songs, while throughout the concert front man, Annika Norlin, kept a close connection with the audience and successfully managed to keep them part of the show.

The only downside to this performance was that the show was played in front of a sitting audience — this killed some of the performer/audience connection that could have increased the positive atmosphere even more. Annika Norlin and her six companions played for about 90 minutes which included extra acts, the comedians from Klungan made an appearance together with the band.

All in all, I believe that this combination of comedy and music had success written all over it before it even began. Throughout the night, I never had any reason to doubt it. Klungan’s type of comedy mixes perfectly with Säkert!’s type of music and lyrics, and that theme lingered through the night.