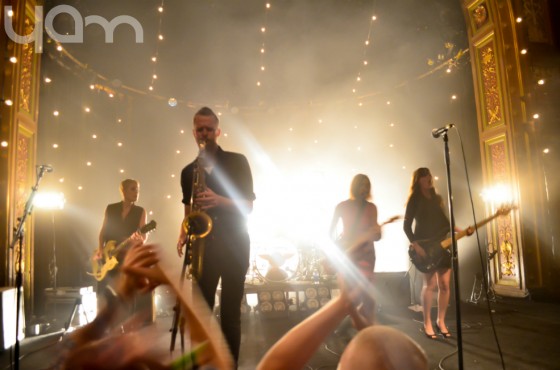 I guess I was expecting too much.

Growing up, Sahara Hotnights was the rock band to look up to. Four fierce women, rockers with great charisma and easy-to-like songs. They have an impressive career to boast about, with almost 20 years in the business and albums that have always received great reviews.

Sahara Hotnights returned to the spotlight this year with a self-titled album. Some claim that it was one of their better releases. I didn’t really feel the same. I was ready to fall in love again with this great rock band — but there was nothing in the album that fit my taste. I know for a fact that they are great live (having seen them before in other music festivals and concerts), so I was really looking forward to the gig at Berns, as well as jumping from excitement about it.

I was ready to rock, but sadly there wasn’t much of that going on. I am not sure if it was the crowd (they were not that engaging), the sound (it was too loud for such a venue) or the band itself (they were lovely but they seemed to be on auto-pilot). Something was amiss during this concert.

The best way to describe the overall feel of this concert is to say that it was safe. Sure, when Maria came out and started off the concert with some of the bands greatest hits, I couldn’t but whoop with joy. The band didn’t disappoint, but something was clearly lacking. I may be disappointed with this particular gig, but I am not disregarding Sahara Hotnights as a whole. When they come out on the stage they are in control, very confident and classy. I will see them again, of that I am sure.