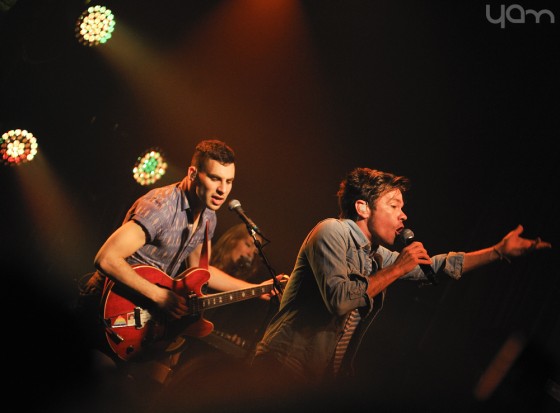 To sum up the concert, pretty much one might say that their name mirrors the feeling you are having at their concert, Fun. Even the warm-up band Walk on the Moon from Ohio was a mood raiser. People had come from all parts of our oblong country to get a glance at the band that became super famous just over some months.

But it hasn’t surprised me that much that these three guys from New York have become so extremely popular so fast. In a time of economic crisis, trouble and misery people want to listen to something that makes them smile again, and Fun. is just a band like that, happy and energetic indie pop.

After Walk on the Moon stepped off the stage, the excitement elevated even more, and people  started to make their final orders at the bar and crowd together in front of the stage.

As Fun. entered the stage they immediately responded to the audience’s positive energy and acted out like they were playing in front of 100,000 fans instead of a couple hundred (still sold out) at Debaser Medis. It took about two songs before front man Nate Ruess was sweating like he was attending an aerobics class, which was no wonder since he jumped around and made moves just like one.

Their sound is playful and lyrics very personal. You get a cozy Queen feeling about the band even though it is very dangerous to compare any band at all to Queen.

During the show they played songs from both of their albums Aim and Ignite and Some Nights. No matter what, the audience loved it. As they play All Alright the crowd sings along like the song has been around for ages. Later in the show, as the song Carry On reaches its crescendo, paper confetti is sprayed out over the audience, but the band looks as surprised as the audience. After the song Nate Ruess says something like “Oh, so the confetti DID make it through customs! At least you can’t say we didn’t have confetti now.” My guess is that the confetti wasn’t planned at all, but it was fun.

After the confetti, and later on as they played their hit song We Are Young and the crowd were waiting for the next hit Some Nights, the show had its peak. It was kind of easy to figure out that this song was going to be played at encore. So after the band “left” the show, the audience started singing the wordless parts of Some Nights, going: “Woooa woo oh wooa” over and over until finally Fun. came back and Nate Ruess said cockily, “That’s good, but let me show you how it’s done”.  The song was performed so well that I was hoping that they ended the show with only this song, and they did.

I had a feeling that they were going to be good, but not like this.