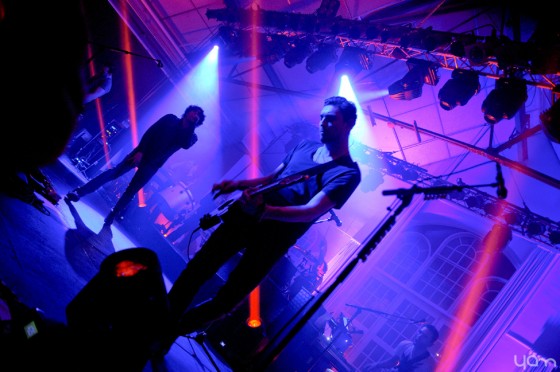 Ironically, the morning before the show, there was an intense snow fall. It was almost like a bad joke for the poor northern Irishmen of Snow Patrol as they arrived to the Munich Brewery arena in Stockholm.

As the heavy snow fell during the day and night, the fans filled up the floor in front of the stage. When the photographers entered the very tight ditch just before the show was about to start, a younger girl in the audience sighed in frustration behind me as I blocked her view. When I told her that we were only going to be there for three songs, she lit up like a baby getting back her lost toy.

As the six guys, plus touring member and background vocalist, Shauna Tohill, entered the stage the crowd screamed and welcomed their indie rock heroes.

The show started off really good. They set a very high tempo and the crowd loved it.

Front man, Gary Lightbody, seemed to have saved a lot of energy for this gig because he was performing moves you only see during an aerobics class. That kind of energy enhances an already good show to an even better one, and both the people on the floor and the people on the balcony a bit further away all had their hands in the air.

The first three songs they played were Berlin, I’ll Never Let You Go and Take Back the City. Then the photographers had to leave. That was too bad because I really liked the show, but I was glad to have seen this much. As I exited the ditch with the other photographers, I looked at the girl who earlier sighed at my presence; she looked a lot happier now…