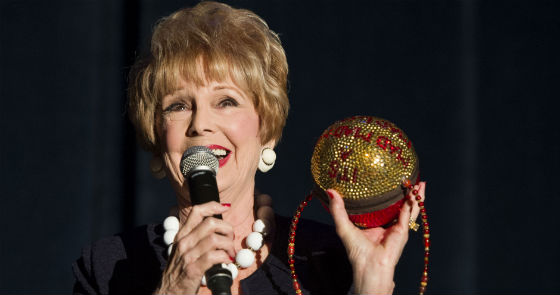 Karen Sharpe-Kramer spoke before a presentation of her husband Stanley Kramer’s film It’s A Mad Mad Mad Mad World at the Cinerama Dome on Sunday.

It’s A Mad Mad Mad Mad World is a really bizarre, madcap film and many of your husbands other films are very serious.

How did that happen?

KSK: I’ll tell you exactly how that happened. Bosley Crowther was the top critic for the New York Times. He loved Stanley’s work, he always gave him the best reviews of any critic throughout his whole career. So one day they were in New York having lunch and Bosley Crowther says, “Stanley, you know we guys, we all get together and we talk about you directors and we have our opinions.” and Stanley said, “Oh, yeah, what’s that?” and Crowther said, “Well, we all think you are the most influential filmmaker of the 20th century, but there’s one thing that we all agree on,” and Stanley said, “what’s that?” and Crowther said, “that you could never, ever direct and produce a comedy.” So there was this long stare.

KSK: And Stanley said, “Oh, yeah?” Exactly. So he set out to make the comedy to end all comedies.

And that’s exactly what he did. That last fifteen minute chase scene is one of the greatest moments in all cinema.

KSK: That’s all real. We didn’t have green screen or any of that technology. Those stunt people didn’t get hurt, but those stunts were all real.

And that editing there. How did he keep that pace up?

KSK: I love you! You have some of the best questions!

The overlapping was interesting because overlapping happens in life, but most people don’t do it because you miss everything if you overlap. They overlapped constantly in the film and you never missed a line. That’s brilliant. Stanley was an editor, so he knew what he was doing. He thought like an editor a lot. The film was about greed. We thought greed was bad in 1963 and it’s become our national pastime and now it’s greed all over the world. I think the film is a very important film.