House on Telegraph Hill, The 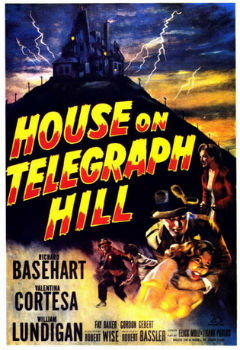 While setting a film noir in San Francisco is not all that special — there are a plethora of noirs and neo-noirs set in the California city — what is so special about this film is its candid look at life in a Polish concentration camp during its expository opening sequence.

This film came out in 1951, four years before Alain Resnais’ eye-opening documentary Nuit et Brouillard — and I don’t think I’ve ever come across an earlier film depicting the horrors of those camps. It’s quite a chilling opening for a film that, for the most part, is otherwise a by-the-book noir.

This is one of only four American films starring Italian actress Valentina Cortese, who gives a superb lead performance. She plays Victoria Kowelska, a Polish concentration camp victim who makes her way to San Francisco on the identity of her friend Karin Dernakova, who died just days before their camp was liberated, only to find herself being terrorized for a fortune that is not rightfully hers.

Fay Baker also gives an excellent performance as the governess who raised Karin’s son Chris, who was sent to live with a wealthy aunt in San Francisco before the war in Europe got too serious. I’d say Baker gives Dame Judith Anderson in Rebecca a run for her money for most obsessed servant ever.

The film also features one of the greatest houses as a character I’ve ever seen. There’s just something so wonderful about a great gothic house to give you the creeps — something Robert Wise would perfect again in 1963’s The Haunting (the scariest movie ever as far as I’m concerned).

This is an excellent noir for fans of the genre. Actually, it’s just a downright excellent film for anyone who loves a good thriller and much more important when it comes to film history than it’s been given credit.