J. Hoberman – An Army of Phantoms 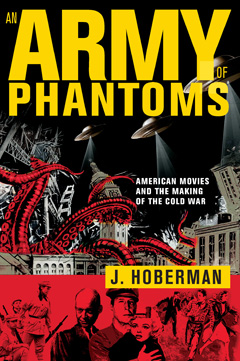 The Red Menace, racial tensions, a seeming wave of juvenile delinquency, as well as The Bomb and other innovations plague post-war America.

The United States government calls upon the American movie industry to uphold prevailing views of The American Way — or face accusations and trials that damage, even destroy careers. In this volume of a planned three-book series on important decades in American film, J. Hoberman chronicles how movies and personal lives were used as promotion for — or distraction from — contemporary political issues.

An Army of Phantoms: American Movies and the Making of the Cold War is an admirably researched, if somewhat rushed, tour of Hollywood history from the end of World War II through 1956. It is narrated in the present tense, with a breathless voice that recalls old-fashioned radio reportage. This energy propels a vast amount of information to the reader, making data and drama easier to consume, if not completely digest. However, few phrases and arguments were striking in the sense that they felt dropped out of nowhere; otherwise Hoberman’s opinions are well-situated and not intrusive.

Spoilerphobes be warned: the book sometimes gives away all of a movie’s plot. It annoyed me that the book built up to a final chapter that focused solely on a movie I had not seen yet — continuing, in a longer form, the type of explanation given in previous chapters rather than encapsulating all that had been said before. However, this may be a personal preference and not a weakness of Hoberman’s writing.

Academic writing often finds it necessary to include all plot points when relevant. I did find myself wishing that Hoberman had continued to cover the rest of the 1950’s. I would have liked to see this author’s take on movies of 1957 to 1959 that reflect the same concerns and paranoia of the films mentioned in the book.

An Army of Phantoms displays breadth, thought, and narrative control that make it more an exploration than a simple overview of early Cold War Hollywood. Many film fans would find it helpful as context for understanding movies and decisions made during this time.