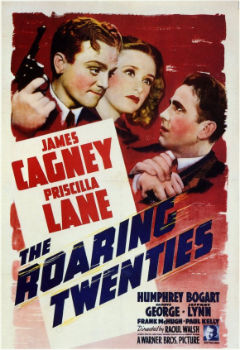 In the early 1930s, during the fruitful “Pre-Code” era, Hollywood released a ton of crime dramas, like The Public Enemy (1931), Scarface (1932) and I Am A Fugitive From The Chain Gang (1932). Some of these films looked at real gangsters from the 1920s and others were fictionalized accounts. Even after the code went into effect you had a few of these crime type films, like Angels With Dirty Faces (1938) – and into the 40s you got the advent of what we now call “Film Noir.”

In that era after the Pre-Code crime films and before Film Noir we have this wonderful Raoul Walsh-helmed film that takes a look at the origins of what led to the age of the gangsters in America. The film stars James Cagney (who spent half his time in Hollywood playing tough guys and half his time singing and dancing) and Humphrey Bogart (before he was a huge star and almost exclusively played tough guys).

The film begins during the end of World War I, as we see Eddie Bartlett (James Cagney), George Hally (Humphrey Bogart) and Lloyd Hart (Jeffrey Lynn) in a trench talking about the end of the war. There’s a pretty brutal scene wherein Bogart’s Hally nonchalantly shoots a boy from the German army. Before shooting him he quips something like, “He’ll never make it to 17.” It’s intense.

When the trio return home from the war they are greeted with hostility from those who had to stay home and work while they were off fighting this abstract war (or at least that’s how those who stayed see it). They also can’t find work because the jobs that were promised them when they returned are all gone. Not too soon after returning the 18th Amendment is passed, which leads to Prohibition era America – which is when organized crime took off, thanks primarily to bootlegging.

The rest of the film shows the way in which the three one-time friends tackle life during the Prohibition, though the film most specifically focuses on the rise (and eventual fall) of Cagney’s Eddie and his relationships with two women: Jean Sherman (Priscilla Lane) and Panama Smith (Gladys George). The film shows the aftermath of the 1929 crash of the stock market  and ends in 1933, a few days after the 21st Amendment brought an end to the Prohibition era. The very last line in the film, uttered by Gladys George’s Panama Smith is one of the most heartbreaking final lines in a film ever.

There are tons of films that examine how the gangsters rose to power in America, but I can’t think of another film that really examines the why behind the rise of the gangster era. That’s why I think this film is so interesting. Its candid look at the life of the bootleggers before, during and after the Prohibition era is utterly fascinating.

Raoul Walsh is one of America’s great unsung directors nowadays, but when you look at his body of work, you can really see how important he was for American film and this is one of his best.

This film is a must for anyone who loves crime films, thirties films, Cagney or Bogart. If you find yourself hooked on this kind of film, I also recommend two other Walsh films: 1941’s High Sierra (one of Bogart’s truly breakout roles) and 1949’s White Heat (wherein Cagney says the iconic line, “Made it Ma, top of the world!”)