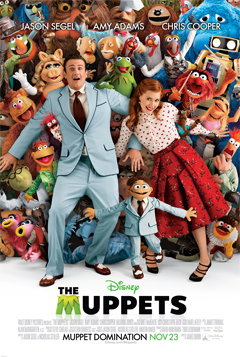 Countless filmmakers have attempted to revamp popular shows and movies from the past, but no one has ever been able to get that formula quite right, leaving many to wonder: what makes introducing the Muppets to this generation any different? Believe me when I say that I was skeptical when it came to Jim Henson’s characters being brought back to life after over a decade, but I can firmly say after watching The Muppets that everything is great and everything is grand.

Instead of throwing us right into the arms of Kermit the Frog or Miss Piggy, The Muppets introduces us to Walter — a Muppet fan who desperately dreams of joining his idols on stage someday. Walter lives a simple life in Smalltown USA with his brother Gary, who announces that they’ll be taking a trip to Los Angeles with his fiancé Mary for their 10th anniversary. The three fans head off to Hollywood, where Walter overhears an evil oil tycoon planning to demolish the old Muppet studios. Taking it upon themselves to save the studio, they set off to meet Kermit and get the Muppets together again to raise the 10 million dollars by putting on a show.

Placing the writing duties for The Muppets in the hands of Jason Segel and Nicholas Stoller was the best idea that Disney ever had. Their writing gives the movie the nostalgia it needs to draw in older fans, while managing to sway in a new crowd with its charm and feel-good attitude. Segel, who also plays Gary in the film, had previously worked with puppetry on Forgetting Sarah Marshall, which granted him an easy transition into The Muppets.

The jokes that they use in the film are fresh and fun, steering away from the offensive route that many comedies have settled for lately. You know you’ve got a family-friendly movie on your hands when the crudest joke involves Fozzie the Bear wearing fart shoes. Not all the credit can be given to Segel and Stoller, as the direction and musical numbers add a great deal to the movie. Director James Bobin creates a world where humans and puppets happily coexist and no one bothers asking how or why.

When it comes to the original songs written for the film, the credit goes to Bret McKenzie, who is best known for being one of the folk comedy duo, Flight of the Conchords. The influence of his previous work can definitely be heard in all four of his songs, but his brand of comedy fits the film appropriately, leaving you with some particularly catchy tunes that will stay on your mind for days. One of his songs from the film, Man or Muppet, has even been nominated this year for an Academy Award.

Adding to the characters that many know and love, there’s a massive assortment of cameos — bringing in a weird blend of popular celebrities and some contemporary stars you might not recognize.

Whether or not The Muppets will usher in a new era of Muppets fans is unknown, but with luck, this movie will prove that the Muppets are still able to give the world the third greatest gift of all: laughter.