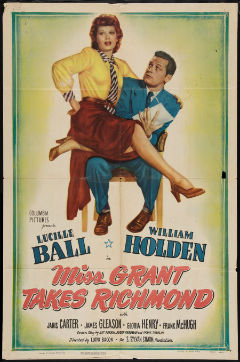 This is such a great little film, anchored by two hardworking Hollywood actors on the edge of superstardom. Made in 1949, Miss Grant Takes Richmond features two spirited performances from Lucille Ball — just two years before she became the queen of television with I Love Lucy — and William Holden — a year before his breakthrough role in Billy Wilder’s Sunset Blvd.

Ball plays the titular Miss Grant, a recent graduate from a secretarial school hand-picked by Holden’s Mr. Richmond to be his new secretary for his real estate firm. Miss Grant is shocked by this sudden job offer as she is a bit of a klutz; the film begins with Grant’s fight with a typewriter, ending in a face full of ink. Mr. Richmond’s real estate business is actually a front for his work as a bookie and he’s counting on Miss Grant’s apparent empty-headedness to work in his favor. Miss Grant, however, is determined to be the best secretary possible. The result is a series of misfortunes for Mr. Richmond the bookie and successes for the real estate firm.

Miss Grant Takes Richmond is one of several comedies from the 1940s addressing the WWII housing shortage, and although the film is not an essential classic like George Stevens’s 1943 film The More The Merrier, it’s a fun watch nonetheless.

Lucille Ball in particular shines in her part, showing off her ability for physical comedy. There’s also a great scene wherein Miss Grant dresses as a gangster a la James Cagney or Edward G. Robinson. Her impersonation is spot-on and her interaction with Holden in this scene is probably one of the funniest things I’ve ever seen.

Full of energy, laughs and just a hint of romance, this film is a must-see for fans of both its stars.