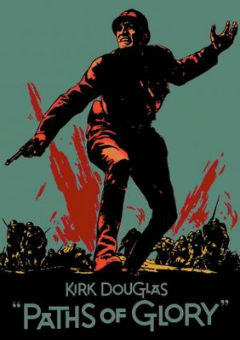 Made just after Kubrick’s third film, 1956’s breakthrough film noir The Killing, this film is a brilliant mixture of noir techniques (high contrast lighting, etc.) with the director’s keen eye for staging and ability to work with a large cast (a la his next film Spartacus).

While this film is based on a book, it’s not hard to see Kubrick’s own anti-war sentimentality in the film. Much like his later film Dr. Strangelove (also based on a book), Paths of Glory shines a light on the absurdity of war and wartime logic.

The basic plot consists of  Major General George Broulard (Menjou) ordering his subordinate  General Mireau (a deliciously unhinged Macready) to send his division on a mission that is tantamount to suicide. Mireau relays this order to  the 701’s Régiment Colonel Dax (Douglas), whose protests fall on deaf ears, as he attempts to lead his troops on the mission.

Everything goes wrong during the mission; troops are killed left and right, some can’t even leave the trenches because of heavy German artillery fire. Frustrated, General Mireau orders the French artillery to fire on their own troops, an order that is refused. When all is said and done Mireau decides his troops must be punished and three men (a bargain, as he originally wanted 100) are court-martialed for cowardice.

A lot more happens than what is described above, including the trial scene (with Douglas’s Colonel Dax acting for the defense) and some truly heartbreaking scenes between the accused (played with heartbreaking gusto by Meeker, Carey and Turkel)

The fluidity of Kubrick’s camera movements during the trench sequence just prior to the disastrous mission is positively orgasmic. His exquisite framing and use of depth in the later courtroom and prison scenes is about as masterful as it gets.

At 95, Kirk Douglas is one of Hollywood’s last living legends, and this is one of his greatest performances. It’s a shame he never managed to snag himself an Oscar. What’s so great about his performance in this film is that it’s a slow boil, starting out relatively subtle and ending in a powerful explosion of passionate words, delivered in a style that is pure Douglas.

The film is a brisk 88 minutes long and there is not a wasted frame to be found. Paths of Glory is largely considered one of the greatest films ever made and is definitely a film that should be watched often. Not just for its biting social commentary, but also for students and lovers of film technique.