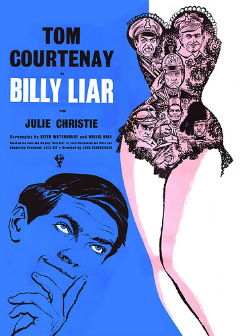 An influential film in the British New Wave, John Schlesinger’s take on Keith Waterhouse and Willis Hall’s Billy Liar has all the earmarks of many of the so-called “kitchen sink dramas”  from the era, but with an added humor that makes it easier to digest.

Tom Courtenay plays the titular Billy, a working-class young man from the fictional town of Stradhoughton in Yorkshire, England. He’s dissatisfied with his life and dreams of moving to London and becoming a comedy script-writer.

In the mean time, Billy works as a clerk, lies to almost everyone in his life, indulges in fantasies – including shooting anyone who irritates him with a machine gun – and is engaged to two women, while in love with a third.

The women are the prudish Barbara played by Helen Fraser, the hard-edged Rita played by Gwendolyn Watts and the free-spirited Liz played by Julie Christie. All three women are marvelous in their roles, each a perfect partner for Courtenay’s Billy in their own way.

While the bulk of the film is filled with humor and almost screwball mishaps, the very last scene is one of the most heartfelt, and really, heartbreaking scenes ever filmed.