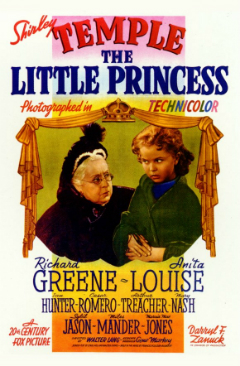 So here I am, the non-lover of classical movies doing a review for one. But in all fairness, I found this movie once while channel surfing and something about it made me watch it all the way through. It could be the fact that it is a very sweet movie, Shirley Temple was adorable in this, or the fact that I am a sucker for anything that is remotely sugary-cute.

This review tackles the black and white version of the film. I tried to find the one in colour but with no luck.

The Little Princess tells the story of Sara Creww (Temple). Her father, Captain Crewe (Hunter) has to ship off to Africa because of the Boer war. He drops of Sara at a private school for girls. There Sara lives a very privileged life as a captains daughter. But on her birthday, the news that her father is missing and left her without money, leaves her in a very bad situation. Soon she is transformed from a beloved student to a bullied school-maid. Sara endures this because she believes that her father is still alive.

I liked the movie but I kind of didn’t like it. In all it is a cute story about a brave little girl who refuses to believe that her dad is dead. In that part I like it, but then it is so overly sweet I can’t stand it. It makes me want to go “aaaw” but at the same time it makes me want to grind my teeth.

My conclusion about this movie is that I like it more than I dislike it, so I guess that is good (considering my previous confession). I think that I am going to watch some more Shirley Temple movies in the near future.