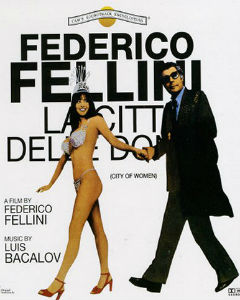 The later you get into Fellini’s filmography, the stranger his films get. La città delle donne is no exception. In fact, it may well be the most surreal film Il Maestro ever made. It’s certainly one of his most self-reflexive.

As the opening credits of the film begin and Marcello Mastroianni’s name appears, a voiceover exclaims, “Marcello again, really Maestro?” This sly in-joke (Mastroianni made several films with Fellini over a thirty-year period, this not being the last) sets the bizarre tone of the film. A little bit later, after being chased by a group of young drugged-out, belligerent, techno-blaring women, Mastroianni’s Snàporaz shouts, “What film am I in?!”

Snàporaz is the only man in the hotel and is rather violently rejected by the women, save one, Donatella (Damiani), who helps him out of the lobby and into a gymnasium where roller-skating women practice kicking men in the groin. He eventually finds his way to the basement where another woman (Silvani) helps him escape on her motorcycle. Later she forces herself on him in a potting shed.

Which brings us to how he winds up being chased by the women mentioned earlier. Again, he escapes, only to find himself in a very strange birthday party — attended by his ex-wife (Prucnal), who berates him for his treatment of her during their marriage.

The film gets weird, or well, weirder, as he makes his way through the mansion — including a hallway filled with pictures of women who, when touched, make orgasm sounds. It then takes a further dive into the surreal when Snàporaz falls asleep and wakes up in a carnival ride filled with all the women of his past.

Believe it or not, a lot more happens than what is described above. While it may all seem pretty bizarre — and it is — it’s also brilliant commentary on misogyny and the over sexualization of women. Snàporaz is a misogynist who is forced to reevaluate his attitude towards women when he is treated the way he treats them.

While the film may not be as fully realized and accomplished as Fellini is capable of doing, it delves into a world purely his own and is filled with images and ideas only Fellini could have brought to life on celluloid.