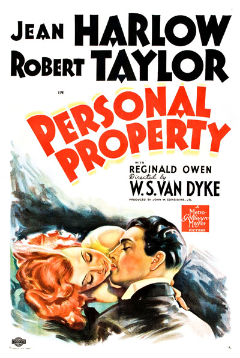 Based on the play The Man In Possession by H.M. Harwood, Personal Property is an American romantic comedy from 1937. Although not a full on “screwball comedy,” at times it comes pretty close.

The film stars Robert Taylor as Raymond Dabney, who has recently been released from prison. When his family gives him money to go away, Dabney decides to go to London. While there he meets Crystal Wetherby, played to perfection by Jean Harlow, an American widow who originally came to London as part of a contest win. When Wetherby’s husband died she was left penniless and stranded in London. Hijinks ensue, including a wonderful scene wherein Dabney pretends to be Wetherby’s butler for an evening full of guests.

Directed by W.S. Van Dyke,  Personal Prorperty isn’t all that original and is most decidedly predictable, but it is fun throughout. Harlow and Taylor have amazing chemistry together and the supporting cast, including Una O’Connor, Reginald Owen, Cora Witherspoon, Henrietta Crosman and E.E. Clive, all help create the screwball-esque atmosphere of the film. It’s exactly the kind of wish fulfillment fare that gave Hollywood the nickname “the dream factory” in the 1930s.

While this film is in no way an essential classic, like Van Dyke’s 1934 film The Thin Man, it will definitely by enjoyed by fans of the era.