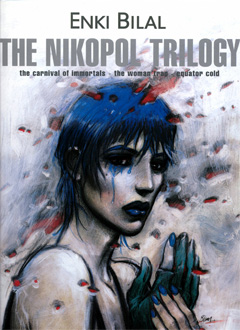 Set in 2023, this trilogy follows the return of Nikopol, who after spending 30 years orbiting the earth finds France under fascist rule after two nuclear wars. The result? It’s a cold, scary world out there with aliens, deformed human beings, and total chaos.

The trilogy is divided into La Foire aux Immortels (Carnival of Immortals), La Femme Piège (Woman Trap) and Froid Équateur (Cold Equator), which chronicle a period of a few years, beginning with a weird floating pyramid inhabited by Egyptian gods, who in turn are having their own internal war as renegade god Horus wants more immortal life. Feeling all messed up, Nikopol agrees to let Horus take over his body, when more chaos ensues.

Everything seems to happen in this story — there are murders, hallucinations, talking animals, Egyptian gods, terrorism, Somalian pirates, sex, fights for freedom, and long lost sons. The art is pretty awesome, even though it was done some 30 years ago. However, I didn’t think the story was that good. Woman Trap does pick up the pace, but Carnival of Immortals just feels long, especially because of those monologue dialog boxes.

I guess I liked Woman Trap the most because it centers around Jill Bioskop instead, and her story is just so messed up and weird that it keeps you reading just so you can know. Nevertheless, when you get to the last page in that chapter, you’re not left with that urge to continue reading.

Get it on Amazon France: La Trilogie Nikopol