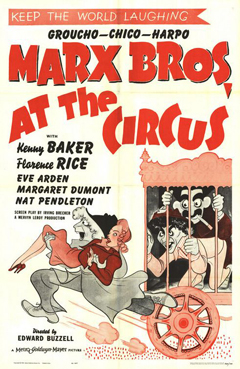 As part of the 2011 – 1939 Classic Film Blogathon that YAM Magazine is doing, I have decided to watch and review At The Circus, a comedy/musical film starring the Marx brothers.

At The Circus tells the story of Jeff Wilson (Baker), the owner of a circus in which he and his girlfriend Julie (Rice) perform. Jeff also owes US $10,000 to his partner John Carter (Burke). Before he manages to pay his debt, Carter lets his accomplices steal the money. This leads to circus workers Antonio Pirelli (Chico Marx) and Punchy (Harpo Marx) to help Jeff recover his money with the aid of lawyer J. Cheever Loophole (Groucho Marx).

The plot seems okay in theory, but it’s the Marx brothers who make At The Circus look much better than it should be thanks to their performances and their natural chemistry displayed here. Among the entire cast, Groucho is the best among the cast with Chico coming close to him in my opinion. And despite most of the musical numbers in the film coming across as random and kind of distracting at times, I did actually enjoyed Groucho’s rendition of the “Lydia the Tattooed Lady”.

There’s a good amount of comical gags and 6 musical numbers displayed in At The Circus. I would recomend to watch this film because of the Marx brothers and the comical gags. The 3 of them are equally humorous and entertaining here.

P.S: Don’t forget to check out the rest of the posts for the 1939 Film Blogathon.