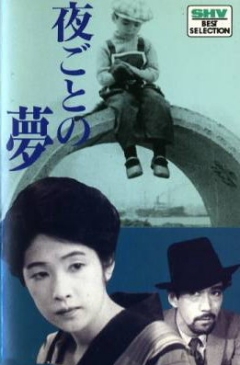 In narrative and thematic terms, Naruse Mikio’s Every-Night Dreams (Yogoto no Yume) could be viewed as a prequel to Apart from You, the sole other Naruse film from 1933 still in existence, and among the five silents in total out of the twenty-four he made, all at Shochiku. Released a few weeks prior to this film, Apart from You features an aging, low-level geisha who had done the best she could to raise a son who was now drifting toward delinquency, in large part because of the disreputable nature of her profession, thus paradoxically making matters worse for her. There was no father or father figure around. If one were, he would probably be as conflicted and inefficient as Narusean males tended to be.

It is possible to see the young son in Every-Night Dreams eventually being similarly ashamed of his mother, now only a hostess in a seedy joint but bound to slip down further, for his well-being. She already has an offer to become a cop’s mistress. There is a father here, or was one when the film begins, who comes back, if only to provide further proof that this is a Naruse film.

Not that it needed it. These two films contain what would become one of Naruse’s trademark themes: strong-willed women, instead of weak-willed men, as breadwinners and survivors in an otherwise patriarchal society. This element is one of the big reason why his films feel more modern than those of his contemporaries, including Ozu’s. (Another reason: the role of money in defining lives and relationships.) “You’ll never survive in this world with such a faint heart,” yells the protagonist, Omitsu (Kurishima), at her dejected, unemployed husband, Mizuhara (Saitô), after he tells her that she and the boy would be better off without him.

She is right. And so is he. Even the most progressive women-oriented Japanese films of the period rarely subverted the traditional gender dynamics to such a degree, or ever. The only point in the film in which Omitsu assumes a feminine role is when, in a moment of emotion after witnessing her being harassed at the bar, Mizuhara vows to work like a madman. But by then we have already gotten the sense of what ails him, and it is obvious that so does she.

Most filmmakers, especially the so-called “woman’s directors,” a reductive term, generally paint such characters with broad strokes, or portray them in a negative light in order to manipulate the audience against them and in favor of the protagonist. It is never so easy with Naruse. Whether it is Saitô’s Mizuhara in this film, Uehara Ken’s Shuichi in Sound of the Mountain (1954), Kimura Isao’s Ryokichi in Anzukko (1958), or Mori Masayuki’s Tomioka in Floating Clouds (1955), these are nuanced, shaded characters. Naruse spends enough time with Mizuhara for us to glean that he is essentially a kind, gentle man, with the look and demeanor of a struggling artist.

As usual, it is the kindness in Naruse’s films that makes the meanness that much more acute. Mizuhara is not cut out for manual labor, or the kind of work he would be able to get in these struggling times. Naruse was not by nature a political filmmaker—he even found a way to largely avoid making propaganda pieces during the war—but this film offers a subtly damning portrait of depression-era Japan. One could say the same thing about Ozu and Woman of Tokyo, also from 1933.

Although less stylistically flamboyant than Naruse’s earlier Flunky, Work Hard (1931), Every-Night Dreams still contains its share of Eisensteinian montages and dramatic dolly-ins. Given how well Naruse was able to convey, even in a relatively early effort such as this, the characters’ emotional and psychological states via his use of looks, gestures, silences, body language, lighting, by cutting on eye movement, etc., such flair seem rather unnecessary at times.

Customarily for Naruse, the use of space makes an impression both literally and metaphorically; when he said that “if [my characters] try to move forward even a little, they quickly hit a wall,” he evidently was not just speaking in symbolic terms. Walls are a constant presence in his films, enhanced by the way he often lit his sets. And, as usual, he employs real locations quite efficiently, and according to the action, never lingering on their documentary value for the sake of it. If any of Naruse’s vanished silents were anywhere near as accomplished as this film, it is a huge loss not only for Japanese cinema but for cinema in general