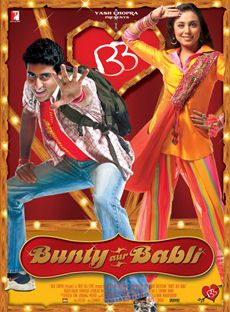 Bunty Aur Babli is the tale of two young people who want more out of life, and find their calling in a life of hijinks and cons. Vimmi (Rani Mukerji) is a young woman who aspires to escape the threat of arranged marriage and become the future Miss India. Rakesh (Abhishek Bachchan) is desperate to escape his fate too, next in line to become a ticket clerk at the railway station following in his fathers’ footsteps.

After Vimmi and Rakesh both fail to accomplish their escape plans on their own, they end up joining forces and begin a life of crime, conning people in large and increasingly extravagant schemes. Along the way they attract the attention of ACP Dashrath Singh (Bachchan) who increases his efforts exponentially as the duo, now nicknamed “Bunty” and “Babli” to the Indian populace, increase their crimes – even daring to cheat someone into thinking they are buying the Taj Mahal.

The first time I saw this movie I loved it – I even rated it a five out of five on Netflix after seeing it. But, after a few years (and about 350 more Indian movies under my belt) I’ve come to nudge that rating down a few notches. While the movie is never boasted as a major success in dramatic acting, I find now that I can’t stand the over-acting and the silliness as well as I used to be able to. I think that Rani is a wonderful actress, and even in a comedy role, she should be able to maintain some of her significantly strong acting skills.

However, if you go into this with the mind-set that it’s just a summer popcorn movie, you’ll have a blast. Abhishek and Rani have good on screen chemistry, and Amitabh always brings charisma to the screen. We also can’t review the movie without mentioning the item number. Kajra Re [1] is still played in clubs and it always draws crowds to the dance floor, Aishwarya is stunning and I do miss her dancing skills. Bunty Aur Babli is a fun film, that has plenty of music plenty of laughs and just enough heart to keep you going.

Available for purchase on Amazon or iTunes | iTunes Soundtrack