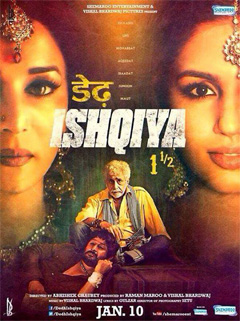 I may have accidentally spoiled myself while keeping track on Madhuri Dixit news back in January, and I do think this may have hindered my full enjoyment of Dedh Ishqiya with a “twist” that is used as both shocker and (in subsequent viewings) character build-up.

Chaubey and Bhardwaj’s second installment in the Ishqiya series follows thief duo Khalu (Shah) and his nephew Babban (Warsi) in yet another con job gone wrong that leads to a fight between the two when Khalu leaves Babban to the wrath of Mushtaq Bhai (Salman Shahid).

Months later, Babban finds that Khalu is pretending to be Urdu poet Iftekhar Hussain to win the heart of the Majidabad Nawab’s widow, Begum Para (Dixit), who has held a poetry contest for the last few years to fulfill her husband’s dying wish- for her to re-marry a poet. Matters get even more complicated with Begum’s assistant Muniya (Qureshi), and local gangster Jaan Mohammed (Raaz).

For casual viewers, Ishqiya is required viewing to watch this one, otherwise some plot points and jokes will make no sense; for example the brief inclusion of Mushtaq Bhai will seem pointless, and the interaction between Shah and Warsi’s characters will seem skin-deep. Though that also comes at a price, I don’t think Dedh Ishqiya carries the same zing that the first part did, even if its femme fatales hold much more complicated backstories, and boy what story. After all it’s said and done, you’d wished that you could have seen their lives played out instead.

Don’t get me wrong, there’s plenty of good-looking frames, laughs, thrills and romanticism around, there’s sizzling poetry exchange between Khalu and Begum Para, and dangerous chemistry between Babban and Muniya. However, Dedh Ishqiya never quite finds its pace. It struggles with its setup and rushes through others, by the end of it all, you don’t really know what hit you.

The most praise-worthy element in the movie is who Begum Para and Muniya are to the overall scope of the film, and we can only commend both Madhuri Dixit and Huma Qureshi for playing the roles as naturally as they did through the smart inconspicuous picturization of their relationship… and throughout the whole promotion of the film. Maybe it’s because I don’t speak the language, but never heard anything like “our characters share a very close relationship to each other,” to even hint at it.

Like I said above, there was a blog titled with a big spoiler, and I knew that their characters had a certain lesbian tint to them. I didn’t exactly knew what was the extent of this LGBT angle, considering how adamant actors in mainstream Bollywood are when it comes to the question of who of the same sex they would romance on screen or how would they feel if someone of the same sex would hit on them. Even gutsy Vidya Balan hesitates back and forth on the subject [1][2], yet here they were Dixit and Qureshi not making a fuzz.

Gay (male) characters are often played for gags in Bollywood, because ha-ha! Men who act like women, right? [1] They’re hilarious. One would think that people should at least be happy with that because, at least, they’re not invisible like lesbians in mainstream India. The only film that comes to mind is Deepa Metha’s Fire, which sets up the lesbian relationship in a similar manner- women whose husbands don’t satisfy their physical needs may turn to lesbianism. At least that acknowledges one of the characters (Nandita Das in the case of Metha’s film, and maybe (?) Qureshi) is into women, though Qureshi’s true backstory is never explored, she merely responds to the emptiness in Dixit’s character.

If it hadn’t been for the gasp-inducing shadow scene, you’d think Dedh Ishqiya could have been made in 1950’s Hollywood, leaving it up to you to decide whether Begum and Muniya are just friends or share something more with those hugs, as well as the devastating scene in which Begum attempts to destroy the remnants of her married life.

But alas, this is a story that revolves around the thieving duo, and though Mushtaq Bhai jokes that he’s the Batman to their Joker, it is the ladies in Dedh Ishqiya and their story that sets the film apart.