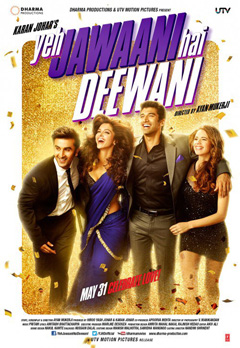 When one grows up, you look back on the things you did and realize how stupid you’ve been throughout your youth. This is kind of how it was with my experience watching Yeh Jawaani Hai Deewani. The film starts with a mousy (if she could ever be) Deepika Padukone as Naina, a girl who’s always led her life as an introvert bookworm. One day, Naina runs into her ex-classmate Aditi (Koechlin), a free-spirited adventurer ‘art student’ who is about to go on a trek to the Himalayas. Deciding that she’s had enough of her grades-obsessed existence, Naina follows Aditi to her trek where she meets with another of her classmates… the laid-back ‘Bunny’ (R. Kapoor) and his best pal the skirt-chaser Avi (A. Kapoor).

The first half  is so age-specific even though none of the actors looked young enough, that I was unable to connect with their jokes and actions. I kept eye-rolling, and even though I’ve been just starting my fandom tryst with Madhuri Dixit, her totally charming number for Ghagra [official clip][English subtitles] felt almost pointless and mood-breaking.

I did understand Naina’s feelings, and accept that this is perhaps the first time I liked one of Padukone’s characters as a whole (despite the lack of range that they might have), but I was still unable to get into the whole “this group of people have all feelings for each other but (the guys) are too immature and selfish to notice.” Then somewhere down that road during the superfluous yet gorgeously shot number for Balam Pichkari [official clip], they grow up, grow apart, and Yeh Jawaani Hai Deewani hints at the coming of age aspects of a film on friendship more than a run of the mill rom-com.

From that point forward, the film does seem to target my age group with talks about lost friendships, rekindling bonds, unexpected marriages, money misadventures, family loss and the whole life shebang. I was specially moved by Bunny’s relationship with his father — for personal reasons [1] — as well as his stepmother. In the end, I was surprised how connected I felt with these characters I didn’t quite like from the start. Generally, in works such as this one, characters end up in very divisive camps depending on the perspective of the production. They either accentuate the dull aspects of a character if the story aims to highlight the freedom of living a full life, or they love to point out how irresponsible characters tend to be if they aim to make them settle. In here, it felt quite balanced, and both Bunny and Naina had their valid points during their playful argument on the subject.

Though I liked Yeh Jawaani Hai Deewani by the end of it all, despite its quite peppy New Year phone-call toast to friendship and life, I did think the first hour was quite insufferable and it’s not worth the 2hrs40min of running time… and it all comes down to the musical sequences. They’re at least 30min. worth of screen time, and except for the one included in the wedding, they’re of little consequence to the plot or explain the feelings.

I can’t believe there’s a cut of the film that has an extra 16min.