On January 1st, I announced the nominations for the most prestigious and ingeniously-named ceremony on the internet, The Juan-And-Only Awards. Today, we gather ’round these laptops (or whatever you’re using to connect to the web) to declare some lucky nominees the best of their respective categories!

As I’m sure you’re all well aware, it’s been one intense year for cinema. While many of the popular award ceremonies never seem to get anything right, my academy of twenty film addicts with impeccable taste have ensured quite the interesting variety of winners. In my world, nothing is predictable and everybody goes home empty handed because it’s a blog post! 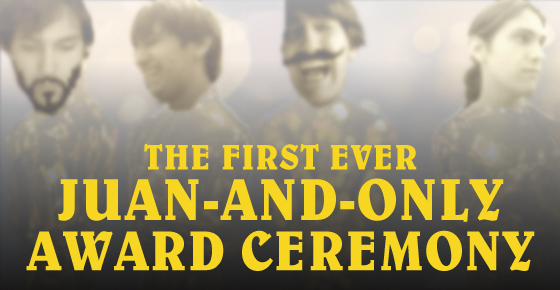 Now you’re probably thinking, “Shut up Juan! I just want to hear the winners!” Too bad! Every award ceremony has about ten hours of red carpet and twenty more of meaningless talking in between, so now it’s my turn to make you all suffer. Plus, we’ve got a terribly low budget ($0.00 as seen above), so I need as many viewers as I can get — just like the television industry! You could obviously go ahead and just skip down, but you might miss something important like me talking about who the Juacademy voters are. Just kidding! I’m not actually telling you who they are because that’s top secret information. On the bright side, there is no terrible human being named Weinstein to buy me off for each category (unless you want to buy me off under the code name Weinstein, then please send me a private message and we can start preparing a pay-off for next year).

Without further ado, here are the winners for the one, the only, The Juan-And-Only Awards.

There were so many soundtracks this year that compiled different tracks to create something that just fit the mood of their film perfectly and each of the nominees fulfilled their job. Of course, one stood above the rest and so we award Drive with the first award of the ceremony. Its use of songs — like ‘A Real Hero,’ ‘Under Your Spell,’ and ‘Nightcall’ — was so impressive in addition to Cliff Martinez’s score, and there is no way you can watch that movie without getting at least one of those tracks stuck in your head.

The runner-up was the soundtrack for Midnight in Paris.

Composing the score for a film (or a play) is no easy job — trust me, my ex-boyfriend had to do it once and I was the one who had to deal with those frustrations (cue laugh track or something). Thankfully, the audiences that enter the movies composed by our nominees never have to suffer the pain of bad or unfinished music thanks to their hard work. The composer who stands above the rest though is Alberto Iglesias for his stunning work on two great films this year. The pieces he created for both Tinker Tailor Soldier Spy and The Skin I Live In undoubtedly add to the dark and suspenseful moods of these films.

The runner-up was Cliff Martinez for his work on Contagion and Drive.

Whether it’s a musical, a horror movie, a period piece, or a documentary, everything can benefit from the fun and friendly helping hand of a song! It should come as no surprise to anyone that of all the movies this year, The Muppets takes the cake this year for their magnificent opening number, Life’s A Happy Song. You can’t give me Jason Segel dancing around town and singing with a muppet and not expect me to get as emotional as can be. No, seriously, I had tears building up in my eyes and I’m sure a few of our other voters had strong feelings for it as well, seeing as it’s the winner.

The runner-up was Man or Muppet, another one of Bret McKenzie’s songs for the film.

Most people like saving these big group awards for last, but I enjoy celebrating these people first because these actors and actresses all deserve their moments to shine. The winners of this film really did shine, whether in the 1920s or the 2000s. The fictional interpretations of famous writers and artists as well as the original character by Allen were all cast excellently and it’s impossible to deny that the impeccable cast of Midnight in Paris was absolutely brilliant.

The runner-up is the cast of Bridesmaids. 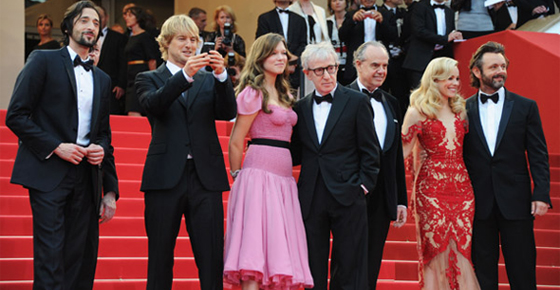 And now for a word from our sponsors…

Find out what films, actors, and directors await their awards on the next page of the Juan-And-Only Awards!