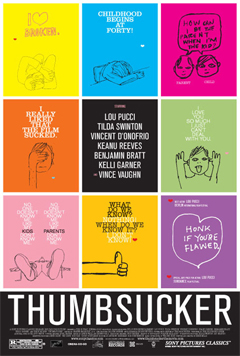 With Thumbsucker, Mike Mills directs his first feature length film – presenting us with a coming-of-age story about a teenager who just happens to suck his thumb. While the film is definitely enjoyable, it is also somewhat dragged down by the usual teenage angst that indie tragicomedies seem to be full of.

Thumbsucker begins by telling us the story of Justin Cobb (Pucci), a young man who is orally fixated with his thumb. Justin’s life seems to be in a slump. He’s a loner, he’s not doing particularly great in class, his family just doesn’t seem to understand him – and he blames it all on his thumb. However, his parents – who only respond to being called by their first names – seem just as fixated with things within their own lives. His mother Audrey (Swinton) is an average housekeeper with fantasies of meeting television celebrity Matt Schramm (Bratt), and his father Mike (D’Onofrio) remains stuck in his past sports career.

Justin also has a crush on his schoolmate Rebecca (Garner), who doesn’t seem to hold much of an interest in him. Without anyone to turn to with his problems, his orthodontist Perry (Reeves) doubles as a sort of psychologist – listening to his problems while regularly checking his teeth for issues that may arise from thumb sucking. Even after Perry’s attempted hypnosis, the young Justin still seems to be falling further into disarray. It’s not until his principal and debate teacher, Mr. Geary (Vaughn), suggest that he might need to begin taking Ritalin that things change overnight. Justin is no longer sucking his thumb, the debate team is flourishing with his newfound confidence and focus, and he’s even scoring with the ladies. But what comes up must come down – and within no time, many begin to see just how much their star debate speaker is changing, and not for the better.

Lou Taylor Pucci does a fine job jumping back and forth between the angst-ridden personality of a worried teenager and the confident and persuasive young adult that the drugs help his character become. But while Thumbsucker mostly revolves around the character of Justin, it’s as much about his parents as it is about him. Vincent D’Onofrio gives us a look into the life of a man who lost a lot in his younger years and feels trapped in his current life. While his character seems hardened, it is easy to see that he wishes the best for his son, even though he maintains a certain distance.

Tilda Swinton is as marvelous as usual in her motherly role, showing us a woman who cares about her son, but who also knows that she needs to make herself happy. It isn’t until her character changes jobs that we get some more insight into her character and that Swinton’s performance really shines. In fact, she says one of the lines I found contributed most to the film during a simple scene with Bratt’s character: “We’re all addicted to something.” And it’s exactly true, both in the film and in life. Each character finds something to rely on, something that they’re addicted to, and it’s a part of what makes them who they are.

As for the supporting cast, Vince Vaughn reminded me about just how pleasant he can be when given the right role and isn’t allowed to ramble on without end. Little can be said for Reeves unfortunately, who only garners up enough emotion to make him more pleasant to look at than the walls of his characters office.

Thumbsucker will, without a doubt, separate audiences on whether it is enjoyable or not. Some might say that it is a fantastic coming-of-age story with well-developed characters, and others will be bored by its slow progress and the excessively quirky nature. Others like myself shall fall in between these opinions, knowing that beneath all of the angst and typical teen situations, Mike Mills has made a relatively fun coming-of-age film with a great soundtrack – but not much more.