Adventures of Tintin, The 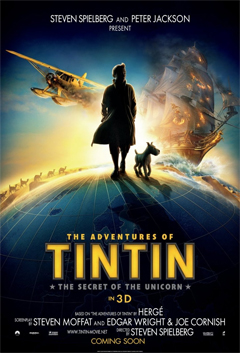 Based on the iconic Tintin comics (specifically on The Secret of the Unicorn, The Crab with the Golden Claws, and Red Rackham’s Treasure), Steven Spielberg and Peter Jackson join forces to give us The Adventures of Tintin.

The story starts with Tintin (Bell) getting a model ship called The Unicorn from the market, which hides an important clue in finding an old treasure. Tintin and faithful dog Snowy embark in an adventure joined by Captain Haddock (Serkis), whose ancestor started the treasure hunt. Ivan Sakharine (Craig) is the antagonist here. He got an upgrade from the comics, where he was annoying but not a villain. Sakharine also kinda looks like Spielberg for some reason. Other remarkable additions to the cast include Nick Frost and Simon Pegg as clueless detectives Thompson and Thomson, who come into play due to a subplot about a pickpocket.

Concerning the animation, I’m proud to announce we are almost out of the Uncanny Valley (which means cartoon motion capture doesn’t give me the creeps anymore… most of the time). The movements and body language of the people (and animals) are quite life-like and only felt strange sometimes in the facial expressions of the most realistic-looking characters. And, of course, the rest of the animation is superb and very fluid. Congrats, Weta Digital.

All in all, the movie is old fashioned in a very awesome way. There’s a lot of action and violence that, while not cartoony at all, are a bit over-the-top. The humor is also quaint and very physical, which makes you laugh and feel nostalgic at the same time. And then, there’s the catch phrases (“Great Snakes!”, “Thundering Typhoons!”), which, ok, were there in the comics, but feel weirdly cute nowadays. But that doesn’t matter, the protagonists are as badass today as they were in the 30s, considering they are basically a teenage boy, a drunkard and a small dog.

So yeah, I eagerly await the sequel… my thirst for Tintin’s adventures is unquenchable.