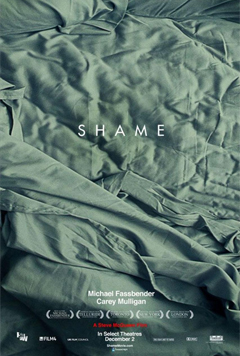 Much like in his previous film Hunger, McQueen doesn’t shy away from the harsh realities of life. He places the audience in a purely voyeuristic position, using an immense amount of long shots to enhance the somber mood of the film. Even the use of full-frontal nudity does not go to waste, as it shows us Brandon at his most vulnerable — both physically and emotionally. With each scene, we struggle to find some comfort in this world of awkward encounters and sexual abundance, much like Brandon himself does.

Shame doesn’t bring any easy answers to the table and there is plenty that goes without saying. A minimal use of dialogue allows the actors to use their expressions to convey this struggle and shows that actions can, in fact, say much more than words. Certain audience members may be turned off by the minimalistic nature, which also includes the film’s ambiguous standing and slow pacing. However enigmatic the film, it offers a stimulating reflection for those willing to embrace an unconventional experience.

This year has been remarkable for Michael Fassbender, but his role as Brandon is what truly showcases his superb talent. He plays the sort of man you’d want to introduce, not to your parents, but to your bed (and maybe your floor or shower as well). Throughout the film, there are the slightest changes in his expressions that show us the downward spiral that his character is taking. Something as simple as the look in his eyes — whether it’s staring at a woman with lust from across the room or watching his sister perform on stage for the first time — allows us to enter Brandon’s world, if only just for one minute. Fassbender’s pitch-perfect acting guides the film and his dedication to this character proves to be one of the finest performances of the year.

Carey Mulligan also brings a stellar presentation of her talent to Shame. Taking a break from her usual characters, she dives into her role as Sissy, embodying this mess of a woman perfectly. Sissy’s character almost feels unusual next to Brandon, as her feelings are always showcased — be it sorrow or joy. Much like Fassbender, so much can be said with simple expressions from Mulligan. One of the most notable scenes, in which she sings a haunting rendition of “New York, New York”, is absolutely mesmerizing, as McQueen keeps the camera focused on her face for most of the song.

Steve McQueen’s Shame is a powerhouse of a film. While some may not be entranced by this masterful character study, many will find themselves thinking about this devastatingly beautiful piece of cinema long after the credits roll.