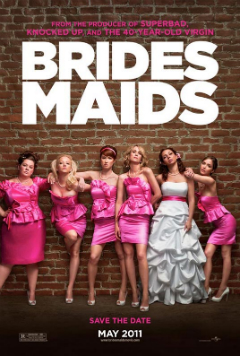 There’s no doubt that Bridesmaids is an attempt to mix the bromances of male comedy with the appeal of female-centered films, but the question is – does it succeed? You better believe it does.

Sporting a cast of hilarious women, Bridesmaids truly gives you a comedy that will get you laughing out loud regularly, while bringing out the emotional big guns with all the heart it’s got.  At the center of it all is Kristen Wiig, who wrote and stars in the film. What she brings to the table isn’t just another chick flick depicting women as most do, but provides us with likable characters who each have real personalities and can manage to be just as crazy as one of the guys. Wiig delivers a comedy about women that largely features women, but manages to appeal to more than just the ladies.

The film surrounds around Annie (Wiig), a mid 30s woman whose cake shop went down under, still lives with roommates she hates, and has regular meetings with her asshole of a fuck buddy (Hamm). Amidst this mess, her best friend Lillian (Rudolph) chooses Annie to be her maid of honor. Soon enough she is introduced to some of the bridesmaids (McCarthy, McLendon-Covey, and Kemper), most notably Helen (Byrne), who instantly seems to want to take over the role of Lillian’s best friend. Not only does it cover the events leading up to the wedding – which lead to insanely hilarious moments ranging from food poisoning to an unforgettable airplane scene – but it also shows us the secondary plot of Annie’s love life. She becomes involved with a lovable police officer (O’Dowd), while attempting to deal with her insecurities and the crazy events around her.

Kristen Wiig truly shines in this film, making her big break from SNL, while still allowing the other women in the cast to bring some outstanding performances to the table. Rudolph proves to be as lovable and amusing as always, while Byrne takes on the role of the rich bitch perfectly. While Kemper and McLendon-Covey have some hilariously entertaining moments in the film, it’s Melissa McCarthy (as the bridesmaid Megan) who truly stood out the most giving one hell of a performance; avoiding the fat friend stereotype and playing an outstanding woman with tons of self-confidence. Although the women make the movie, there is plenty to say about both Hamm and O’Dowd. Jon Hamm surprisingly makes for one of the most convincing, yet entertaining, assholes of all time. O’Dowd, however, is the complete opposite of Hamm’s character, showing us just how much of a romantic he can be outside of The IT Crowd.

Paul Feig does a marvelous job directing, moving from television to film and packing together a ton of laughs within two hours. While the film has been compared to Apatow and Farrely films, these six women impressively exploit the situations they’re put into better than any of their male predecessors could ever hope to. Bridesmaids is definitely a huge stepping stone to proving just how funny women can be, and will hopefully lead to more female-driven comedies in the near future.