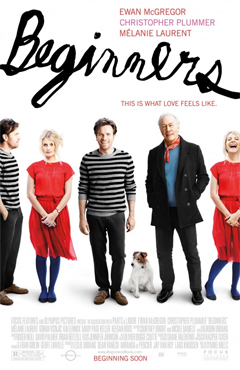 Beginners is a film full of sincerity – something that far too many lack nowadays. It’s about new beginnings, relationships both old and new, and the possibility of finding happiness and love in a world that seems so full of sadness. It’s about life; and Mike Mills truly paints us a wonderful picture.

There are two love stories covered in Beginners – both of which are beautifully intertwined, leaving one unable to survive without the other. Oliver (McGregor) introduces us to the first story, telling us about the past, specifically 1955. He tells us about his parents, Georgia (Keller) and Hal (Plummer), their marriage, and life in the fifties. It is only after Georgia’s death and after almost forty years of marriage, at the age of seventy-five, that Hal tells his son something he wouldn’t have expected: “I am gay.”

Within no time, Hal is able to explore his homosexuality in ways he never expected. He falls for a younger man Andy (Visnjic), and spends the last months of his new life living with him, all while enjoying the new experiences and embracing the options that an open identity presents him. Oliver watches his father from the start of his illness to his death as a supportive son, but always maintaining a certain distance as well.

The other piece of Mills’ film revolves around Oliver’s life. He mourns for his father, gracing us with touching memories of his father’s late life and illness. He is a man afraid of intimacy and commitment, whose current romantic entanglement begins with his arrival to a party dressed as Freud and a chance meeting with the lovely, but damaged, French actress Anna (Laurent). As the film progresses, we’re given a look at the budding relationship between Anna and Oliver – along with some amusing and insightful subtitled thoughts from Arthur, Hal’s old dog that Oliver now cares for.

Christopher Plummer’s lovely performance as Hal is truly a highlight of the film, and will hopefully be remembered well during the next awards season. His character truly embraces everything at the end of his life and it’s beautiful to see Plummer as a man starting anew. Whether it involves going clubbing or to pride parades, writing political letters in support of gay rights, or just having a movie night with a bunch of his newfound friends – Hal takes hold of his life and begins the life he always wanted to lead. His chemistry with both McGregor and Visnjic is marvelous, as he plays both a father and a lover with the same grace he’s always had. Plummer fills the role with nothing but joy for his gay lifestyle, and the sheer happiness that his character shows – even when faced with death – is truly something to behold.

Both Ewan McGregor and Mélanie Laurent also give their characters an air of sincerity that is hard to find in films nowadays. The two come across so comfortably in the film, and the chemistry they bring to the scenes between their characters are gentle and sentimental – drawing you in slowly from the start in hopes that this will be beginning of a beautiful friendship. This can definitely be attributed to the realistic and personal writing as Mike Mills, who previously directed Thumbsucker, reveals much of his own life with the film. His execution of mixing past and present reminds us about just how different everything is now and what opportunities might lie ahead.

Mary Page Keller and Goran Visnjic’s wonderful performances must also be mentioned. Keller plays the hardened mother of Oliver, who has accepted her husband’s sexual orientation unwillingly, and holds the heavy burden of being left alone with her son all too often. Regardless of how strange it may seem for his young character to be dating Plummer’s older newly gay male, Visnjic does a fine job at making us believe in Andy’s love for Hal. He delivers plenty of cute and amusing lines that could leave anyone smiling, and remind us how essential his character is to Hal.

Some will complain that the film is a bit slow and character-driven, but the sweetness that is embedded into the bittersweet Beginners will appeal to the more patient viewers. The sheer emotion that Mike Mills delivers with Beginners is impressive, providing us with a small and simple film that will leave many touched and hoping for their own beginnings to work out for the best.