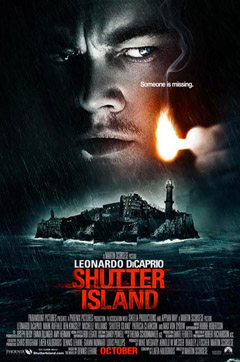 Based on the novel of the same name by Dennis Lehane, set in 50s United States, it tells the story of Marshal Teddy Daniels (DiCaprio), who is in charge of investigating the disappearance of a murderess. She has escaped from a hospital for the criminally insane located on a remote island known as Shutter Island.

The film’s selling point is that it’s a Scorsese film starring his latest muse (male muse?), Leonardo DiCaprio. The trailers sell the idea that this will be one of those thrillers to get you crazy with its ending; however, you’ll probably end up nodding and saying, “Okay” by the end, instead of the more common, “Wow, I did NOT see that coming.”

The acting is pretty good, and the appearances of Jackie Earle Haley (Little Children, Watchmen) and Patricia Clarkson (High Art, Dogville, Vicky Cristina Barcelona) more than make up for the effort to sit and watch DiCaprio for more than two hours, for those who hate watching him anyway.

And for those that might hate me saying this, did anyone feel the editing of the film was off? And I’m not talking about a “there’s something weird about this movie” off, but “wow, I just got totally disconnected from the characters with this scene” off.

All in all, please don’t expect a surprise ending like the promo material suggests, but instead enjoy the thrill ride and the acting more than the story… or even just the characters.