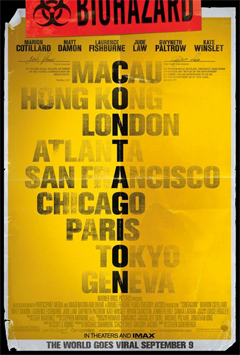 The average person touches their face about three to five times every minute. I was made aware of this fact during the film Contagion and actually grew slightly frustrated with myself each time I scratched an itch, ran my hands through my hair, or placed my chin on my hands. Many things we never seem to think about involving health and humanity are presented in such an interesting fashion that our minds can’t help but be infected by Soderbergh’s latest film.

Contagion is an elaborate tale that follows the rapid spread of a deadly disease, as well as its effects on humanity. The film follows multiple characters — families who have been affected by the virus, dozens of doctors who are fighting for a cure, and even those looking to exploit the widespread panic for personal gain.

Steven Soderbergh is a director who knows exactly what he’s doing. Sometimes he is a man who delivers all-star features and sometimes he tends to dive into the experimental film realm. There is no denying that the man has made some fascinating things, and Contagion fits nicely with the rest of his greats. Working with an intelligent screenplay by Scott Z. Burns — that leaps through multiple characters and cities without losing the audience — Soderbergh manages to work within the limitations of the disease genre, while still not losing his experimental and artistic style.

The film has a beautiful color palette that isn’t as overbearing as Traffic, but still adds that simple hint that we’ve moved along to another story. Stephen Mirrione, the editor of the film, has worked with the director countless times — most notably when he won the Academy Award for Traffic — and it’s easy to see why these men work well together. To almost seamlessly weave together these stories is a tough thing to do, especially if one intends to keep audience attention, but they pull it off damn well. Interestingly enough, this marvelous collaboration between Burns, Mirrione, and Soderbergh is not the first, as Soderbergh’s The Informant! also involved all three men — as well as one of Contagion’s lead cast members.

Matt Damon really deserves a round of applause for his performance here. There’s not a doubt in my mind that Damon becomes a better actor with almost every film he makes. He brings an authentic feel to Mitch Emhoff, a man whose life has been seriously affected by the disease — and tears your heart out when he finds out his wife has passed away right from the start. Paltrow — who plays Beth Emhoff — does fine in her short on screen time, although she doesn’t get to do much but laugh, drink, and play dead.

It would be hard to talk about everyone in the cast, as practically every performance was great – regardless of how much on screen time was given – but I do want to give credit where it is due. Fishburne, Cotillard, and Law are all fantastic in their semi-leading roles, and Cranston, Martin, and Hawkes do wonderfully with their small but significant characters as well. But the two performances, aside from Damon, that stunned me the most were from Kate Winslet and Jennifer Ehle. Both playing women who are genuinely devoted to their jobs and helping people, they bring something special to each of their characters that reminds us that there really is some hope, regardless of how bleak a situation might look.

Every piece of this well-crafted film serves to create a tense drama that never lets up. Even the simple and fitting score by Cliff Martinez adds to the gripping nature of it. Those who walk in expecting a horrifying disease film will be left disappointed, but Steven Soderbergh’s Contagion entertains and fascinates from its opening scenes to its final moments.