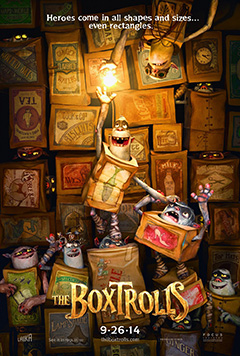 Over the last few years, Laika has managed to give us off-beat animated movies that stand more as pieces of art in motion, than actual stories, I think. Maybe it’s just me, but neither of their previous works have managed to move me the same way other simpler-looking animated movies like Colorful or Leafie: A Hen into the Wild did- The Fox and the Hound kills me, guys… though ParaNorman has been moving up in the emotional scale. It doesn’t seem to be different with The Boxtrolls.

However, in a movie distribution world dominated by CGI animation, how can one miss the chance to watch one of them “major” stop-motion releases… even if it’s the dubbed version. Based on Here Be Monsters! by Alan Snow, The Boxtrolls is set in the town of Cheesebridge (Quesadilla in the latino dub!) in the 1800s. Rumor has it that the city is plagued by little creatures known as Boxtrolls, small monsters that wear boxes and live under the city, who come out to the surface each night taking away whatever knick-knacks they’re able to find or unscrew. One eventful night, Red-Hat Archibald Snatcher (Kingsley, brilliantly translated to Archibaldo Hurtado xD and voiced by Juan Manuel Bernal) informs cheese-loving White-Hat aristocrat Lord Portley-Rind (Harris) that Boxtrolls had kidnapped and devoured a baby, while threatening to eat the town’s pricey stash of cheese. Scared out of his wits, Lord Portley-Rind agrees to the terms for Archibald’s plans for social-climbing if only he rids Cheesebridge off its troll plague.

The rest of the story is, of course, for you to discover.

This is actually the first stop-motion animation that I decided to watch in 3D, and I did feel like I lost a lot of the textured details of the sets and characters, which I love from Laika compared to the smooth layouts of other types of renders. Though the animation and effects aren’t as flashy as ParaNorman‘s were, the company has kept the standard high. Plus, you gotta give them props for a history of design that isn’t exactly your run-of-the-mill cuddly supporting filler character so prevalent in mainstream children’s films; each one of the Boxtrolls have their distinct grotesque -albeit never forgetting their own cuteness- flavor.

Storytelling-wise, I thought the movie lacked a little emotional punch even though my adult-brain told me there were a lot of grown-up themes and metaphors. I saw a lot of comments on how it mirrored a lot of the happenings during the Holocaust, though my mind never went there. I felt it did show a lot of social struggle, after all Archibald’s goal is to become a White-Hat and attend the elite’s cheese-tasting despite his own genetic weakness, as well as mirrored a lot of aspects seen in the political arena told with a lot of sarcasm underneath the theme of outcasts clearing their names and finding their way.

A lot of the success of the film relies on its Bad Guy, and Archibald doesn’t exactly terrorize (like Doctor Facilier in The Princess and the Frog) but presents himself as a sneaky villain whom we want to -maybe- see reach a greater status (until we see him for his true colors), because we can’t really sympathize with snobbish pricks who ignore their children (the gore-thirsty Winnie, voiced by Fanning and Melissa Gedeón) and steal the town’s hospital budget to buy expensive cheese. However, his desire for power and recognition is so great that it ultimately destroys him.

I enjoy thinking about it even in its dub, so I can’t wait to check it out on its original audio. In the meantime, extra quarter of star!

Does ANYBODY know if these sets by Snap Creative [1][2][3] are available in any shop? Or were they just commissioned for giveaways?