The Fangirly Diary of a Geek Girl: Getting ready for the party!

Ok, I may be here for this. Mila Kunis wants a That 70’s Show reunion, and I will probably watch that. Will this make the ship wars come back? Jackie/Fez was terrible in my opinion. Then again that final season was kind of a mess.

They are indeed asking the original cast if they are interested in doing Star Wars again, says Mark Hamill:

They’re talking to us. George Lucas wanted to know whether we’d be interested. He did say that if we didn’t want to do it, they wouldn’t cast another actor in our parts – they would write us out. … I can tell you right away that we haven’t signed any contracts. We’re in the stage where they want us to go in and meet with Michael Arndt, who is the writer, and Kathleen Kennedy, who is going to run Lucasfilm. Both have had meetings set that were postponed – on their end, not mine. They’re more busy than I am.

And we have a picture for Neverwhere! Sad Sir Christopher Lee couldn’t be in the shot. And now we know it will start on March 16th on Radio 4. Yay for stalking Neil Gaiman’s Twitter! OMG, I can hardly wait! 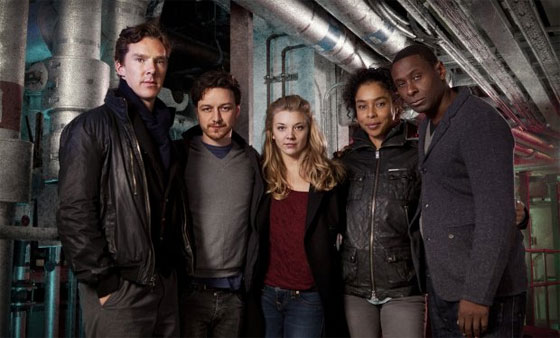 We get singing at the Oscars. Yup, we get a Broadway tribute with songs by Jennifer Hudson from Dreamgirls; Catherine Zeta-Jones from Chicago, and all the main cast of Les Misérables… who will probably sing “One Day More” and “I Dreamed a Dream“.

Now, here’s some fun nominations: The Saturn Awards noms! And that’s not just because this is one of the few award shows where I gladly watched all the nominees. That and the Annie Awards. Come one, it’s the Academy of Science Fiction, Fantasy, & Horror Films! Best Academy Ever!

Batwoman wants to get married. Sadly, it would be to whiney Maggie Sawyer, instead of awesome Renee Montoya. Anyway, considering all the backslash DC is getting for hiring Orson Scott Card to do a Superman story, this is quite a happy coincidence. I just really, really hope this ends up way better for Kate Kane than poor Alan Scott whose lovely boyfriend got fridged just after he proposed. That was a horrible thing to do, DC! Here are lots of character posters from Monsters University! Also cute Uni IDs for students and faculty alike, and I kinda want to photoshop my face in one of them~

This day ended with a beautiful animated video of Shane Koyzcan’s poem To This Day. This seven-minute short depicts the work of various artists “that explores living with bullying, depression and abuse”.