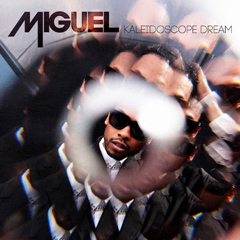 Admittedly, I was a bit skeptical come time to actually listen to this album. With a gorgeous song like Adorn in heavy rotation on the radio, I didn’t really know what to expect. Miguel seems to be a part of a new wave of R&B artists attempting to bring love and soul back into the genre. However, a song as beautiful as the lead single runs the risk of being nothing more than a minute spark of brilliance in a sea of hopelessly stereotypical radio pop. It’s also the album’s first track, setting the supposed tone. The tracks that follow have to at least live up to that standard while resisting the urge of every pop album to be a compilation of singles as opposed to a finished product.

However, Miguel’s voice has such a hypnotic quality about it I was more than willing to risk disappointment.

Vocally, Miguel tends to fashion himself a mixture of Prince, lilting vocals when playing it soft, and Michael Jackson, quirky hiccups and grand falsetto sweeps. Once one gets over the tics in his vocal styling, she’s struck by the absolute purity therein. His voice is uncorrupted by the need to be vocally flamboyant or self-indulgent, choosing clarity over almost cartoonish melisma or strained power singing. To put it bluntly, his is the virgin voice of the industry, untouched and crisp.

If you pay close enough attention, however, you notice that it’s not just in vocal tendencies and performance style that Miguel finds much in common with Prince. It seems he’s dipped into the purple paisley wonder’s Purple Rain era, borrowing the heavily acid-soaked guitars and playful backing instrumentation, and wrapped it around lyrics about sexual and pharmaceutical exploration. Songs Use Me and Do You… are similar in color and hue to songs like Darling Nikki, so much so it almost errs on the side of imitation.

All obvious similarities aside, I’d be hard-pressed to find another album like this one in mainstream R&B. Much like Frank Ocean before him, I’m quite impressed with the artistic liberties Miguel takes, going so far as to meld a multitude of song styles and samples to create grandiose sounds (as in Kaleidoscope Dream, the titular song borrowing the playful beat of Eminem’s My Name Is and a psychedelic vocal break reminiscent of the Brothers Johnson classic Strawberry Letter 23).

It seems with the disappointment of his debut effort in mind, Miguel wanted to take his time with Kaleidoscope Dream, releasing the album in three parts: two EPs (Kaleidoscope Dream: The Water Preview, released 31 July 2012; Kaleidoscope Dream: The Air Preview, released 11 September 2012) and ultimately the finished product. It’s clear that he wanted to explore different techniques and subject matter to create a cohesive album that would fully express his growth as an artist. At times it leaves much to be desired, becoming nothing more than an R&B cliché (Don’t Look Back, How Many Drinks). At others it almost seems like he’s more interested in seeing how far he can push the music, leaving the lyrics to be rather unspectacular. However, some intriguing poetry throughout, even a track penned by Alicia Keys (What’s The Fun In Forever), and refreshing whimsy manage to take this album from potential mediocrity to a unique listening experience.

Standout Tracks: Adorn, Kaleidoscope Dream, The Thrill, Where’s The Fun In Forever, Pussy Is Mine, Candles In The Sun

You can listen to the album on Xiami and Spotify. You can buy the album at Amazon as a CD or MP3 download or on iTunes.