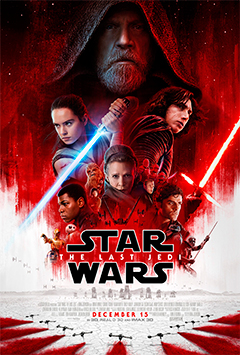 Star Wars: The Last Jedi is the Star Wars film that takes the most chances, and they mostly pay off!

The story picks up almost immediately after Star Wars: The Force Awakens, The Resistance might have dealt a big blown on The First Order with the destruction of Starkiller, but The Republic is still gone, and so they are mostly alone and in great need to find a new base while being pursued. Meanwhile, Rey is trying to convince a reluctant Luke Skywalker to train her in the ways of the Jedi.

First things first, Rian Johnson is a better filmmaker than J. J. Abrams. Some of his shots, from the way they were frame to the use of the colors, were pure poetry and made me want to have them in hi-res so I can print them and put them in my wall. Of course, the credit also goes to cinematographer Steve Yedlin.

The way some of the action was filmed was something we haven’t seen in Star Wars before. Two scenes in particular were the highlight of this: one was a space battle where the money shot was repeated from different angles to help you process the scope of the amazing moment you were witnessing, and it reminded me of anime. It was a moment of glory in the story and it was totally earned. The other one was a lightsaber battle so clearly inspired by Samurai films that it was amazing. Slightly related to that aesthetic, there was a scene from the past told from two points of view, until we have the final truth in a sort of Rashomon Lite.

John William’s music was better used this time around, with each character’s theme actually improving the mood of the scene. This specially helped the case of Rey and Kylo Ren’s scenes, since this is the second time around we get to listen to them in the Star Wars movies.

And thus, we come to the characters. Kylo Ren (Driver) and Rey (Ridley) stories were an integral part of the film, and the journey of how these characters end up by the time the film is over is fantastic. Their scenes together were well acted, and so intense, that a mere touch of hands felt like so much more. Also, their fight choreography was perfect because it felt so real. I appreciate this trilogy actually doing lightsaber scenes that are creative and believable, but interesting to watch, and without an overuse of CGI.

But these were not the only male-female duos we had in the story: we had Poe (Isaac) and Vice Admiral Holdo (Dern), who clashed heads about how things should run in the Resistance, which took Isaac’s character to new places, not always nice, but showing his flaws and how he must come-through to become the leader Leia wants him to be. Dern’s character, on the other hand, was an amazing depiction of a new kind of female leader, so different from Leia but also, so strong and true, that by the end of her character arc you know why Leia held her in such high esteem.

The other male-female duo was Finn (Boyega) and Rose (Tran), who took us into what is basically a side-quest that weakened the second act, because it felt it could have become its own thing. The Canto Bight scenes, while interesting to look at, could have been tightened up, to save us some run-time. That said, I enjoyed the time we had with both of them and BB-8 (and eventually Del Toro’s DJ) that I almost wish they had their own movie, expanding the dark themes shown with less humor.

As for the legacy players, Hamill and Fisher return in top form, both taking their characters in new directions, not only evolving but displaying the Force in new and interesting ways. I can’t imagine what will happen with Episode IX now, with Carrie Fisher gone, and with Leia being more important than ever to the Resistance.

As for the baddies, Serkis’ Snoke is just the best. His body language and the inflection of his voice alone elevate what is a not-always-realistic CGI character. Then, there’s Gleeson’s General Hux, who has much more to do this time around, even if they took his character to a different direction, full of dark humor that reminds me a bit of Monty Python. The only disappointment was Christie’s Phasma, who actually doing things but was also criminally underused.

Also, yeah those porgs were great. And the fact they were obviously puppets and animatronics worked in their favor. Their moments with Chewbacca were perfect. But I still love those crystal foxes more.

Star Wars: The Last Jedi is a highly entertaining movie, that sprinkles with humor the more dramatic themes of bonding and self-sacrifice. And while the film left some questions either unanswered or rendered useless, and made me wonder how the state of things is going to be come Episode IX, it also managed to give us so many heart-stopping moments that actually makes this movie not for the faint-of-heart fan. And that is high praise indeed.

This film is dedicated to Carrie Fisher, and I may have teared up a bit (a lot) when the text appeared on the screen.