The Fangirly Diary of a Geek Girl: Don’t Touch Lola

Brad Bird talks about the possibility of Incredibles 2. Come on, man! If a Pixar movie needed a sequel, it was that one!

I have been thinking about it. People think that I have not been, but I have. Because I love those characters and love that world. I am stroking my chin and scratching my head. I have many, many elements that I think would work really well in another [Incredibles] film, and if I can get ‘em to click all together, I would probably wanna do that.

Rumor has it we’ll finally get our Justice League movie after all. In fact, production would start early next year, and Henry Cavill will still be Superman.

Talking about DC, the Wonder Woman show on CW might not be as dead as we previously thought:

[Amazon] is being redeveloped. We’re waiting for the script to come in. We have not seen it yet. We are preparing to pilot it off-cycle should the script be what we want it to be. We do not want to produce something that doesn’t work for that particular character. It is the trickiest of all the DC characters to get done.

It’s not tricky, you just suck!

Another Benedict Cumberbatch interview, where he talks about acting methods with Meryl Streep, who is his co-star in August: Osage County:

I asked her how she approached the multiple layers of her part. And she said, ‘I don’t know. I don’t have a process. It changes with every job, doesn’t it?’ And I thought, Oh, thank God, to hear her say it. This whole thing about technique or method? It’s bullshit. People say, ‘Oh, you’re so precise.’ But within that I work very hard to give every part a heartbeat. I learned a lot from just watching Meryl in repose. It was a bit like a Sherlock deduction actually.

Plus, Benny Batch is going to appear in a short film called Little Favour. The Indiegogo campaing did quite well!

Joss Whedon confirms Scarlet Witch and Quicksilver are the character he was talking about for The Avengers 2.

You know, they had a rough beginning. They’re interesting to me because they sort of represent the part of the world that wouldn’t necessarily agree with The Avengers. So they’re not there to make things easier. I’m not putting any characters in the movie that will make things easier.

He also says Iron Man will definitely be in the movie and he totally has one armor around or will have by the time whatever happens in The Avengers 2! Phew!

Kevin Feige talks once more about his plans for Phase 3, but this time he has something extra. Marvel zombies! Yeah, it’s not gonna happen. Totally not kid friendly and alternate universes don’t work well in film franchises~

Are you going to draw figures in chalk with your 3-year-old with Hulk eating someone? Or Captain America with his brains coming out of the top of his head? Probably not. 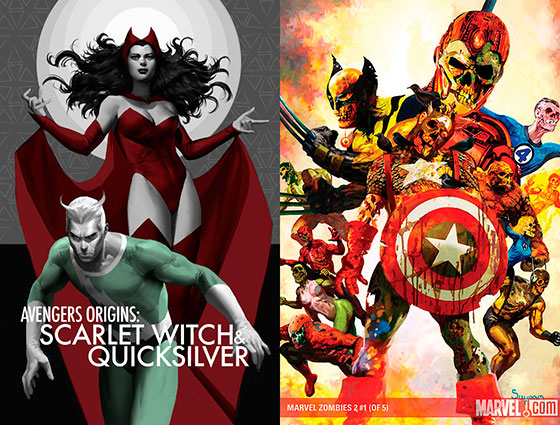 BTW, Tony gets the money! Iron Man 3 reaches a billion dollars at the box office and RDJ must be laughing all his way to the bank~

So, you know how Sam Mendes is done with James Bond, right? Well, they are obviously looking for a new director and guess which one was offered the role? Why, Christopher Nolan of course! If he accepts, would this mean we’ll get Tom Hardy, Marion Cotillard and Joseph Gordon-Levitt there? Will another love interest die so as to give James Bond more pain and motivation? These are clearly very important questions!
–

And that’s it for the week. Before I go, even more Iron Man 3 concept art from the book Art of Iron Man 3 [1] [2], beautiful key frame art created by Andrew Leung, and some by Rob McKinnon, then digital sculpts from Josh Herman, prop designs by Ron Mendell, a storyboard by Martin Mercer, a VFX breakdown from Digital Domain [3], and a early animatic by Federico D’Alessandro: