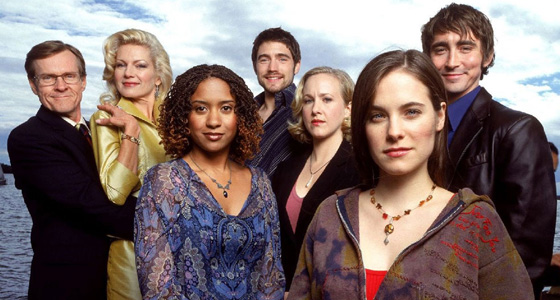 I’ve had this urge to re-watch Bryan Fuller’s quirky ahead of its time Wonderfalls ever since I caught a glimpse of Caroline Dhavernas on Hannibal, since- you know, it’s not often I get to see her on screen. Though I never saw the show on its original 4-episode run, and discovered the show when it was well into its DVD years, the moment I saw it, I fell in love with it and took my own Bryan Fuller cancelled-series journey.

Despite being cancelled after the broadcast of its fourth episode, Wonderfalls is a 13-episode series following the life of over-educated and unemployable Jaye Tyler (Dhavernas), a 24-year-old Brown University graduate with a degree in philosophy who works as a sales clerk at a touristic shop at the view of Niagara Falls. She usually spends her life avoiding her whole family — doctor of a father (William Sadler), overbearing mother (Diana Scarwid), her closeted older sister (Katie Finneran) and her comparative religion erudite of an older brother (Lee Pace) — a sarcastic quirky bunch of dissatisfied overachievers who hope that Jaye will one day put her life back together, stop living in a trailer park and stop working retail.

While drinking and making witty remarks with her best pal Mahandra (Tracie Thoms) and making googly eyes with the brokenhearted new bartender (Tyron Leitso), Jaye has an emotional (or maybe spiritual) breakdown when inanimate objects in the shape of animals begin talking to her giving her cryptic messages. In short, Jaye believes she’s becoming a crazy person. In short, Wonderfalls is made of awesome.

The show is nearly 10 years old, and surprisingly~ the visual effects of the talking animal muses hold up better than I remember it being. They’re scattered throughout, so they’re never the center of an episode- no, that goes to all of the actors reaction to the quirky sarcastic back and forth.

Sharon (Sister): [discussing Jaye] I think we should put her down.
Karen (Mom): Sharon…
Aaron (Brother): It is just like going to sleep.

You could literally just burst out laughing at the drop of a line, as simple as the response to “Stupid cow.” on Ep05 — Crime Dog — or any of Jaye’s pop culture responses like Agnes of God-ing someone on Ep03, Wound-up Penguin. Jaye really is the quintessential Ellen Page’s Juno, but without all the obscure hipstery references~ and hey! Both are Canadian! Dhavernas and Page, I mean.

The magical aspect about the show, however, is that it’s really got the perfect cast. Though Leitso’s Eric is a little wimpy and bland compared to the rest of the characters, and the storyline with Heidi (Jewel Staite) really irks me; the Tylers complement each other in a way that families only can. Especially with Finneran and, Fuller’s greatest find, Pace as the eldest siblings of the sharp-tongued Jaye. While the playful banter between the sisters is of enormous joy, and ANY scene is golden with Finneran’s presence, while Pace comes out of nowhere when he’s fully introduced on Ep05 and later develops a concern for his little sister on Ep07, Muffin’ Buffalo, featuring a muffin-baking Beth Grant who later showed up on Fuller’s Pushing Daisies.

Overall, Wonderfalls gets a little clustered by the last two or three episodes, when it starts getting a lot more cuckoo with the spirituality and explaining Jaye’s higher purpose, but it also means it gets to play around with the atmosphere of the show a lot more, especially in episodes Cocktail Bunny and Totem Mole. But in the end, it’s really pretty perfect [1].

We’re all fate’s bitch. You might as well go ahead and bend over for destiny now.

If you want to watch Wonderfalls, your only bet is a physical copy on Amazon. Because Fox doesn’t love its shows.