The Fangirly Diary of a Geek Girl: Be The Dragon!

Greetings, fellow fangirls and fanboys! Oscar time is getting near with the noms! But besides congratulating some and getting angry at the snubs, we fans had a more important Hannibal related news this week~ Before that, let’s see how the week started:

Here’s Outlander‘s trailer for Season 1 return after the midseason finale! Also, there was some talk about one (of many) disturbing scene to come: “the spanking scene” (where Jaimie spanks Clarie for putting the whole group in danger by running away)

For Claire, she finds it hard to wrap her mind around what this man she loves is about to do. What I loved about it is we took time [afterward to include the scene in] the context of their marriage, how to get past this. Even tho she might not accept what he did there, they had to be coming to understand his reasons.

Remember some time ago there was talk about a John le Carré’s The Night Manager TV adaptation? With Tom Hiddleston and Hugh Laurie? It’s totally happening and will be co-produced by BBC and AMC! They start filming in spring 2015 (of the north hemisphere). Of course, Hiddles is, obviously, uncontrollably excited about it~

I could not be more excited to join BBC One, The Ink Factory and AMC for The Night Manager. Jonathan Pine is a thrilling prospect. Described by John le Carré as a ‘sometime army wolfchild with a special unit’ in the British forces, ‘caterer, chef, itinerant hotelier, perpetual escapee from emotional entanglements, collector of other people’s languages, self-exiled creature of the night and sailor without a destination,’ Jonathan Pine is the most mysterious and complex kind of British hero. It’s an honor and a privilege to work with such truly impeccable collaborators as Hugh Laurie and Susanne Bier in bringing this to the screen. David Farr’s screenplay, adapted from le Carré’s brilliant novel, is absolutely outstanding. I’m beyond thrilled and I can’t wait.

Latino Reviews seems to have some scoops about which young actors and actresses are vying for the role of young Cyclops, Jean Grey and Storm in X-Men: Apocalypse. The most exciting thing for me? Both Sophie Turner and Saoirse Ronan want to play Jean Grey! Yes, please, to either. Way better than Chloe Moretz. Nothing against the gal, she just doesn’t say “Jean Grey” to me~

Sam Heughan seemed to have got caught after drinks, because dude was full spoiler mode about Outlander Season 1 Part 2!

The end of season one is basically telling everything that happens in season two. I think Claire and Jamie are both in two very difficult places. If you’ve read the books it’s not a spoiler, she’s pregnant and he has had this terrible thing happen to him. He’s been broken and their relationship has been tainted so they’re both in two separate worlds. Yet they’re married and they love each other but yet it’s not black and white. It’s very gray.

Talking about The CW, both Arrow and The Flash (and other series) had been officially renewed for their fourth and second season respectively! Congrats, guys!

Also, OMG The CW is getting another DC Comics superhero series! And it will also be in The Flash and Arrow-verse. The twist? It’s going to be animated! Yep, Vixen is coming to The CW’s digital-only network, CW Seed this (North Hemisphere) Fall! 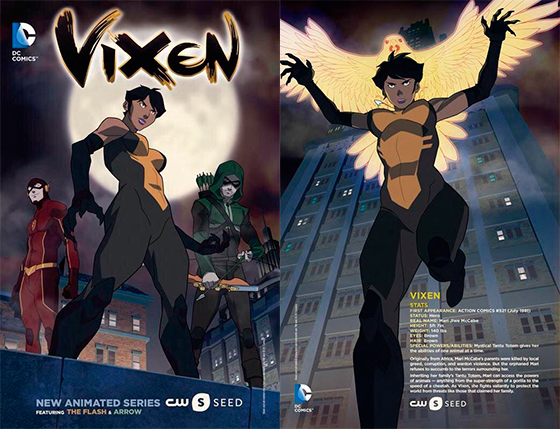 We have seen some snippets Penny Dreadful Season 2 before, but we finally have a full trailer with new characters included!

Here’s some info on Supergirl! She’s going to be a “crime solver”, have an “awesome costume”, and be a “strong independent (young) woman”~

[Supergirl] a very strong, independent young woman. She’s coming into her own. She’s dealing with family issues. She’s dealing with work issues. It’s a female empowerment story. If you look at the strong female characters we have on the air, it really is resonant of that … We’re big feminists. It’s her intellect, it’s her skill, it’s her smarts. It’s all of those elements. It’s not just her strength, which she does have.