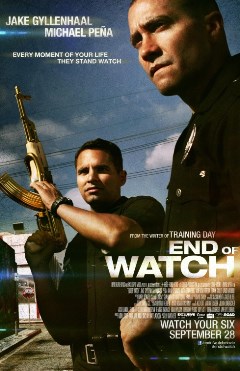 If there was a “buddy cop” film that stood out strongly last year, it was David Ayer’s (Training Day) latest film End of Watch, starring Jake Gyllenhaal and Michael Peña as two police officers showcasing what it is to live their daily lives and that’s mostly thanks to the director’s decision to use handheld cameras to tell their story.

The handheld camera use lives through Brian Taylor (Gyllenhaal), who documents every moment of his life for his film project, much to his fellow officers’ chagrín. His best friend and partner in crime is Mike Zavala (Peña), who shares a very strong bond with Brian. They joke around each other all the time yet they support each other: Brian falls in love with Janet (Kendrick) and Mike’s wife Gabby (Martinez) gives birth to their first child. But when business happens, they’re serious and determined to solve crimes at any price.

Their work and life routine gets rocked when they discover a Mexican drug cartel operating right within their own neighborhood. Against warnings from fellow officers, federal agents and even other gangs, they get deep and deeper into the research of the Mexican cartel.

The life of a police officer isn’t pretty to watch and David Ayer knows it, considering his past with Training Day and he showcases paperwork, crimes scenes, patrolling and anything that comes with the job. However, End of Watch operates as the opposite of Ayer’s previous works such as Training Day and Street Kings [see: the world of police corruption] thanks to the bromance relationship between Brian and Mike, as we are shown that they honestly care about each other and they would really take a bullet for their partner, which resulted in the film’s strongest asset: the natural chemistry between Jake Gyllenhaal and Michael Peña.

Police officers and crime scenes have been covered endlessly on both film as well as network/cable televisión, but End of Watch‘s main characters makes this film hard to forget. Most of the film spends its time with them and both Gyllenhaal and Peña carry the film effortlessly and connect almost immediately with audiences. From near-death moments to jokes and teasing, both actors did a tremendous job at shifting to what the script and direction demands and elevated regular conversations into something really engaging to watch. Both actors should have been Academy Award nominees last year because they had career-high performances, but only Peña nabbed a well-deserved Independent Spirit Award nomination.

As awesome as it was to see Gyllenhaal and Peña talking with each other, the supporting cast had their good moments too. While it was interesting to see America Ferrera going against-type as a tough cop, Anna Kendrick had two adorable moments: one of them happened after Janet spent her first night at Taylor’s place and the other one happened during her wedding dance with Taylor, which was a reminder of how great Kendrick is as well as displaying a typical unforgettable moment for married couples greatly. Frank Grillo as the boys’ boss fared well and Natalie Martinez complemented well Zavala’s character and had her comedy momento during a conversation with Janet and the boys.

Last but not least, the crimes scenes and life situations were well-done and felt realistic thanks to the handheld camera use. Despite this leading into shaky camera territory at times, it helped giving End of Watch its touch of realism with its scenes, but it’s not a major distraction thanks to its lead characters. However, only one scene came across as distracting: the antagonists using the camera which took away from Brian’s shooting at the start, but it later made sense (sort of) by the end of the film. Nonetheless, End of Watch remains as one of the best 2012 films I’ve seen so far.