Ghost: Peruvian food has a lot of it, right? The organs of the cow and chicken, and stuff. 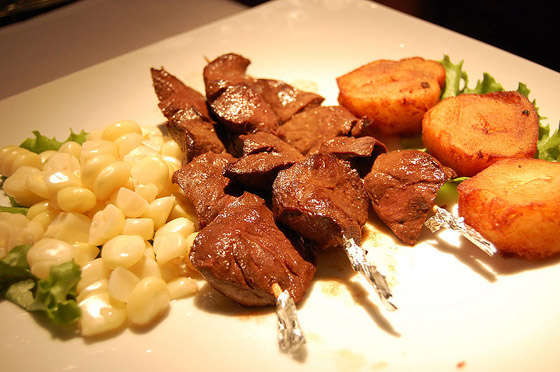 Amy: Cow heart is the staple Anticucho [1] xD we do have a bit of menudencia. We have a word for it instead of saying “organs” or something. LOL Everyone eats organs, though, maybe not as hip food or anything, but I think every country has one or a few dishes with them.
Ghost: That’s true. Scotland has Haggis.
Amy: I don’t know about sheep though, maybe if it doesn’t smell too strong, I could try some. I’ve never eaten anybody’s stomach though. xD
Ghost: There’s a commercial kind, though. You don’t have to eat the too traditional one. LOL
Amy: But if it’s not in the sheep’s stomach, it’s not really Haggis, no? It’s just a special kind of sausage. xD
Ghost: Well, that happens when you industrialize things, which brings the point that you haven’t chosen between Ramen or Udon.
Amy: Damn it! Hmm… I think Udon is much more flexible than Ramen. xD You can eat it with anything.
Ghost: So you can with Ramen!
Amy: But Ramen is suffering with its college student fame. Poor college students who can’t afford to go out, eat Ramen.
Ghost: The instant ones.
Amy: Still… I think I gotta choose Udon. Then again, I had a nearly instant Udon Curry last time to try to replicate the one I had in Taipei. It was not close. xD

Ghost: But you’ve had good Ramen…
Amy: Oh! I just remember I have had good Ramen. Kintaro Ramen in Vancouver was pretty good, or at least it brings back good memories of skipping class for food with friends. LOL
Ghost: Food memories! What are your food memories? Apparently, they’re very important to see how they shape someone.
Amy: I have very odd memories with food. Like I said, I was a picky eater, so I remember my aunt would let me sit forever at lunch picking at my food until I was “done” or my mother would pick me up to go home. xD
Ghost: But that’s not really a “food memory” as much as it is an anecdote with food.
Amy: Well, another food memory is with my grandpa making fried egg with soy sauce on rice. LOL Served with a glass of Inca Kola~ The Peruvian Soda [1]. xD
Ghost: That’s a very comfy food.
Amy: Well, it’s simple to make alright, but not very filling or nutritious xD
Ghost: Remember when I made the Chinese sausage and mango rice?
Amy: LOL, that’s what hunger does to cooking creativity.
Ghost: Still claim it tasted fine.
Amy: Coz you were hungry, and had nothing else at home. At least it wasn’t hot dogs and mango. At least Chinese sausage is a little bit sweet. xD

This weird conversation is part of the 2012 YAMYUM Food Blogathon.