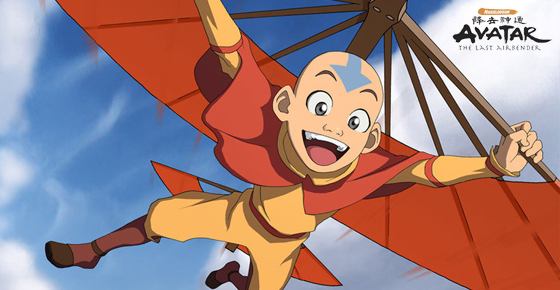 Aang is a twelve-year-old boy born to a tribe of airbenders, people who command and manipulate air currents. He’s always had a knack for airbending, but he never thought he was better at it than his friends—in fact, all Aang ever worried about was having as much fun as possible. But when Aang is identified as the Avatar—a reincarnated soul possessing the power to bend not only the air, but water, earth, and fire—Aang is thrust into a life of high expectations. In an attempt at cling to his carefree lifestyle, Aang flees… and no one hears from the avatar again.

Not for one hundred years.

Aang awakens to a world that is nothing like how he remembers it: The fire nation has disrupted the balance of all nations, driving the water tribes into hiding and chipping away at the earth nation’s defense. As for the airbenders, they’ve all been destroyed. Aang is the last.

Aang is the only one who can restore balance to the nations, but he can’t do it with airbending alone. He must travel the world in order to learn waterbending, earthbending, and firebending—but with the fire nation hot on his trail, will he be able to fulfill his destiny?

Avatar: The Last Airbender is something of a coming-of-age story set in a world that mixes martial arts with magic. We follow Aang and his ragtag group of friends as they travel from nation to nation, so  Aang can learn what he must in order to restore balance and defeat the fire nation.

The story is far from one-dimensional. There is conflict and mystery set up from episode one, and the character introductions and backstory flow with ease. For adults, the show offers characters that grow and learn on their journey and a compelling storyline that keeps us hooked episode after episode. For the bigger kids, we have action, a rich mythology that defines each culture as the story progresses, and even some sprinkles of danger and romance. For the younger kids, we have a bright color pallet, a fantastic array of strange creatures, and an avalanche of laughter from start to finish.

The characters are what drive the story: Aang must overcome uncertainty in order to restore balance to the nations. Katara leaves the only world she’s ever known and finds confidence. Sokka learns what it means to be a real warrior, and Toph finds purpose—and with it, friendship. Every character has an arc which gives them emotional depth, and we see ourselves in each one.

Avatar: The Last Airbender is a show loaded with humor, meaning, and mythology. There’s never a dull moment as the story progresses. It’s one of those rare series that reminds us of the good we have inside of us. When I finished the series, I was motivated to restore the balance in my own world, and I believe that is how many feel as they watch the show.