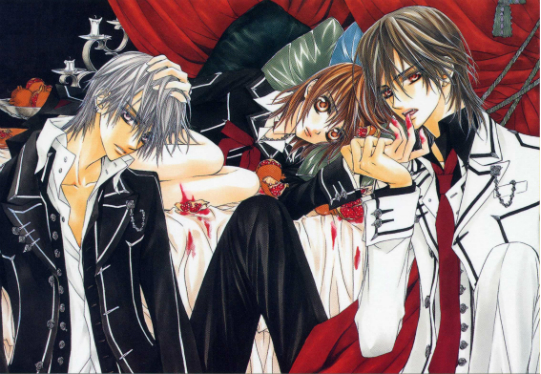 Before the world was struck with Twilight fever, there was Vampire Knight (ヴァンパイア騎士). Now, this is how you do a vampire tale — no sparkling stuff but all gory and bloody with twisted family ties and dark secrets. My mouth waters as I think back to this great anime.

In Cross Academy, humans and vampires attend school together. Humans during the day and vampires during the night. It is the headmaster’s wish that humans and vampires get along — a wish that many oppose but he refuses to give up on. Yet the humans need to be kept safe from the night class and that is where two of our heroes come in. Yuki and Zero’s job is to make sure that the “night class” doesn’t eat the “day class”. Although the vampires behave, it’s sometimes hard for them to keep their urges at bay.

The vampires are led by the “pure-blood” Kaname Kuran, the last of his clan and a respected member of the vampire society. Seeing as he was born a vampire and not turned, he is pretty much the prince of the vampires. Yet there are many in the vampire society that want to see him dead. Yet all he cares about is Yuki. He is intent in keeping her safe and does anything to keep her happy.

Yuki is an orphan. All she remembers is being attacked by a vampire but being saved by Kaname. This leads her to have a fascination with him, seeing as he seems to know more about her than he lets on. But as Kaname tries to keep Yuki close, he also pushes her away.

Zero, also an orphan, hates Kaname with a passion. He is also trying to protect Yuki as well as trying to push her away. What are they hiding? What role does Yuki play in all of this?

Vampire Knight is a really great anime. It originates from a very popular manga, one that I have read but stopped because it got too overly complicated. Although it has some great plots, it came to a point where the story stopped making sense. It might have been a translation issue, but by that time the anime had kicked in and it was so much better than the manga. It was so good I watched it in one go.