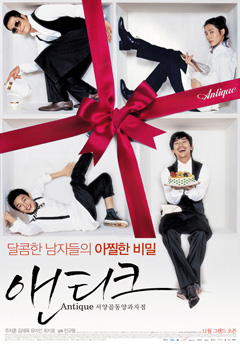 It all starts with a cake. Kim Jin-hyuk (Ju) presents it to the girl of his high school dreams only to be rejected. Shortly after she walks away, the shy, slightly awkward Min Sun-woo (Kim) openly confesses his love to the handsome star pupil. His rejection is slightly more… abrupt, to say the least. Bristling at the idea that this shy lad would confess his love to him, Jin-hyuk calls him a few choice slurs, tells him to go die, then throws his own attempt at a confession — the spurned cake — into Sun-woo’s face.

Fast forward eleven years later. Sun-woo becomes something of a legend both in the pastry world and among the vast majority of the male population. Meanwhile, after a string of failed relationships, Jin-hyuk has decided to open his own patisserie, convinced Miss Right will walk through the door. Instead, the once-rejected flower boy offers to be his chef — under the condition that Jin-hyuk doesn’t hire any women. He brings with him an unparalleled talent for baking French delicacies and a long trail of brokenhearted men.

What touts itself as a sort of alternative romance comedy actually turns into something far more intricate once you realize the depth of Jin-hyuk’s past and Sun-woo’s innate magnetism for sexual partners. Using a pastry shop as a conceit for attempting to both hide one’s pain and find one’s happiness is quite clever. When flashes of Jin-hyuk’s past surface, you’re able to understand why he not only lacks the constitution for anything sweet, but why that weakness extends to his failed love life. Though the actual story behind Jin-hyuk’s past is quite harrowing, the connection to a side story about a string of kidnapping-turned-murders of small children stretches itself thin in the end.

Meanwhile, Antique’s cast is pure perfection. Ju Ji-hoon perfectly portrays a man who slips into a practiced façade, but whose inner demons work to keep him a bit embittered, if not jaded about everything around him. The role of a former boxing champion who comes to the patisserie for the cake and the companionship is played with charming precision by K-drama superstar Yoo Ah-in. Choi Ji-ho portrays the hopelessly adorable bumbling bodyguard so genuinely the character becomes a tragic figure of simplicity. The role of one of Sun-woo’s lovers, a violently jealous French pastry chef named Jean-Baptiste Evan, actually works almost flawlessly, thanks mostly in part to Andy Gillet’s portrayal — though the execution of the end of the relationship was a bit touch and go.

However, the real star of this film is undoubtedly Kim Jae-wook as the gorgeous pastry chef. Kim’s beauty lends itself effortlessly to the role of an almost hedonistic flower boy, but his openness creates a brilliant dichotomy for a character that could easily just be thrown in for pretty boy appeal. What’s truly impressive is Kim’s portrayal of a homosexual playboy. He could’ve been overbearingly effeminate, instead he was brazen and unapologetic. He could’ve been a simpering diva, instead he was strong-willed and poignantly affectionate. He didn’t rely on his looks to be successful, though his track record with men would point to the contrary. Instead, his ability to create French delights with flair and energy made him the powerful force he was in the film. He almost outshines the rest of the main cast, but if it weren’t for the pitch-perfect dynamic between Jin-hyuk and Sun-woo, Antique would almost certainly not have succeeded as much as it did.

What could have been a simple romantic comedy turned out to be a film that was as layered as one of Sun-woo’s delicate pastries. Though it had its miscues regarding certain plot points, Antique still stands as a beautiful film with an incredible cast.