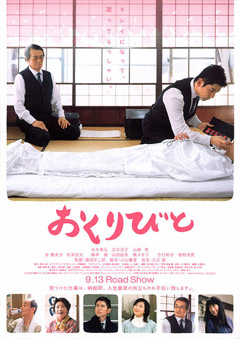 I remember that when watching Okuribito (a.k.a. Departures, but Okuribito is a cooler title, non?) for the first time, I was in awe of the natural acceptance of death in the film.

Death, obviously as a westerner, is seen as a “goodbye” because the person passing away is never going to be there anymore. A lot of people can’t move one from the death of a loved one, yet in the film it is perceived with dignity… and is very moving.

Winner of the Academy Award for Best Foreign Film — the first for Japan since the category was instated, and without counting Akira Kurosawa — Okuribito tells the story of Daigo Kobayashi (Motoki, ex-idol from Shibugakitai), an average cellist who’s lost his job and is forced to go back to his hometown where he finds a job as a traditional funeral “artist” to prepare the dead for their “departure.”

There is something simple but very poetic going on in the film, which is basically another Japanese melodrama — there’s a lot of art in the prepping of dead people. It’s creepy, in the sense that those are bodies, but awfully beautiful.

Maybe you’re not able to connect with the abandoning parent story that ends up somehow connected with the child they left, or the spouse that’s never understanding. However, what’s interesting about the film is the job. A job that deals with touching the dead is… taboo in many places, it’s shown in the film where Daigo is outcast by his friends and his own wife because of the job he does — which brings good money, too. But when the time comes, and one must prepare the body of a loved one, it is so masterfully handled that it’s impossible not to shed a tear or two.

There’s an amazing scene between Daigo and Sasaki-san (Yamazaki), in which Daigo is sick of handling the dead and can’t even stomach seeing raw mean and animals (like a dead hen). Sasaki-san tells him that for us to live, then something must die. In order for that death to mean something, he should enjoy everything he eats and continue living. And they also eat amazing fried chicken for Christmas.

Overall, a lot of what makes Okuribito worth it is the handling of such a taboo topic, yet for those avant-garde lovers, there will be little to enjoy because this is as traditional as it comes.