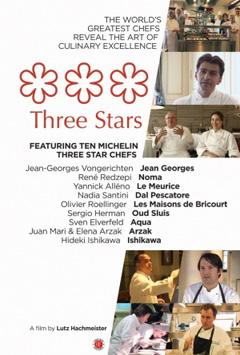 Whether or not you are the type of person who pays attention to food critics, you have probably heard of that sacred publication, holiest of all grails for most aspiring and confirmed chefs: the Michelin Guide.  This best-selling series of city restaurants guides is one of the most respected in the world and the stars it awards can make or break businesses, men and women.

Three Stars is Lutz Hachmeister’s attempt to lift the veil surrounding the world of those who managed to climb to the pedestal that two or three Michelin stars represent.  This 83-minute documentary is an awe-inspiring waltz from one city to another and, more importantly, from one chef to another.

Hachmeister shadowed and interviewed ten chefs from eight different countries. His camera shows us how frenetically these great individuals live from dawn to midnight, all for the sake of their passion and quest for perfection. However, this frantic search for the right ingredients and the right way to serve them seems to be the only thing those chefs have in common because like all arts, cuisine is highly individualistic. Their specialties, approaches to restaurant and team management, and visions of cuisine differ vastly.

While the title and synopsis may suggest the opposite, I find that Three Stars is more a composite portrait of who a “top chef” may be, than it is an exposé of the star granting process or of its aftermath. Even though Michelin Guide director Jean Luc Naret gets a fair amount of screen time, the film’s real stars are the chefs and their profound work ethic. We soon come to understand that, at the highest levels of the game, food and customer satisfaction matter more than the Red Guide’s stars.

Hachmeister shows us how personal and commercial success depends on the chef’s level of dedication to his patrons, the quality of his relationship with his suppliers and cooks, and the acuity of his business acumen. Most importantly, he subtly highlights the common denominator to all great artists which, to me, is an unwavering faith in their own vision of their craft.

No stone is left unturned: ingredient sourcing, customer management, team leadership style, restaurant economics, and personal philosophy are all explored. Hachmeister’s shots are flickering but even though they take some getting used to, they are surprisingly seamless. As a whole, Three Stars is very cohesive and manages to hold the interest from beginning to end. For my part, I left the cinema with a renewed respect for this profession, hungry and full of inspiration.