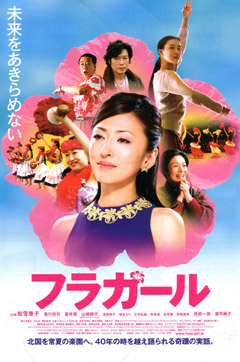 I wondered why Amy decided to get me to write a review for Hula Girls — other than Yu Aoi being her favorite actress/idol of the moment — and then it hit me.

Hula Girls takes place and was shot in Iwaki, Fukushima Prefecture, affected by the earthquake and the whole nuclear plant business. So… there was a reason other than crowd-pleasing.

The film, set in the 1960s, follows a group of girls that set out to learn to hula dance in order to save their town from the decline of the coal mining industry, for which Iwaki was known for — besides their Onsen (hot springs). The heads of families are losing their jobs, and tensions arise from the fact that they want to open a Hawaiian center in a really cold city.

Enter Hirayama-sensei (Matsuyuki), a hula dancer with money trouble that ends up in the faraway city to teach town girls how to dance. Underdog story everywhere you’re smelling from. Besides the fact that Hula Girls is based on actual town girls who learned to hula dance to save a town, the film is the good type of melodrama.

Yu Aoi in the role of Kimiko, playing lead and supporting, doesn’t show much except for a whole LOT of charisma, which worked a lot for the film’s popularity in Japan’s box office numbers, as well as the Japanese Academy Awards — the film was also Japan’s official selection for the Academy Award that year.

There are two important things to note in the film. First, Iwaki dialect — which the actresses had to learn — is a character in the film, as it was highlighted by having the teacher speaking in standard Japanese, slowly letting her ease into the dialect once she integrates herself with the town’s people and the girls. Two, the film shows the range of what Japanese people can be — harsh at times, but willing to help each other in a time of need.

All in all, hardcore film lovers will find little to enjoy in a film like Hula Girls. For the rest of us who like melodramas about little people doing grand things — that happened in real life — Hula Girls will leave you with a smile, and loads of booty-shaking.

If you want to watch Hula Girls, NEW PEOPLE and Viz Cinema are showing the film to raise funds. You can get more information on the date and where to get tickets on NewPeopleWorld.com