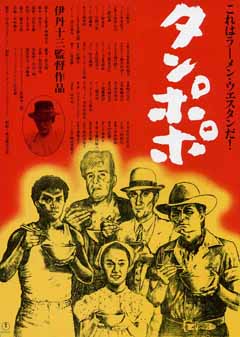 I had heard A LOT about Tampopo, maybe even more from non-Japanese movie fans, so I think my fellow film bloggers may have built the movie too much for my own sake. People had told me how much they craved for a bowl of ramen after the film was over, I thought I would be doomed — still being stuck in my search for the perfect ramen shop in town.

Tampopo tells the story of an experienced truck driver, Goro (Yamazaki), and his eager young truck assistant Gun (a very, VERY young Watanabe), who end up having a bowl of mediocre ramen soup at a shop frequented by a bunch of hooligans — one of them called Pisken (Yasuoka), who has been trying to get the ramen shop owner’s widow, Tampopo (Miyamoto), to fly off to Paris with him.

After a fight gone awry and a noodle shot down, Tampopo pleads Goro to help her become a better ramen-maker, with Goro accepting the challenge to teach her everything she must know to become a ramen master. Having said the basic premise of Tampopo, I’d like to point out that the film is very unusual, as it takes turns towards other storylines that have little to do with Tampopo, but are all unified by the idea of food as a pleasure of life, which includes a kind of explicit — and very rather awkward to watch with the family — scene of food fetish.

I get it. Food is part of life, it’s there when we’re born and when we pass on — though I must admit that scene with the dying wife was a bit to get accustomed to. One of the points to get across was that some things have to die in order to become the food we ingest — this  explanation Tsutomu Yamazaki, coincidentally, makes in Okuribito has stayed with me since I saw the film. With only a few scenes involving food, Okuribito managed to do what Tampopo wasn’t able to do for me… get me cravings of food. Though I had plenty of laughs while watching the film, I found Tampopo’s quest for the perfect ramen recipe to be rather boring, even while developing the budding friendship between Goro and Tampopo.

Which brings me to the point… all of these main characters, except for Yamazaki’s Goro, could have been played by anyone. It’s not like it was bad acting, it’s okay acting just sprinkled throughout the whole length of the film shared with other people that we never see again.

But I guess I might be seeing the movie the wrong way, since I was going into it to watch the food being made — the most memorable food scene for me was the making of the Omurice [1], which did leave me with a craving for it. To me, it was the segment that better explains our relationship to food… we don’t need fancy ingredients, just the will to make something tasty to be enjoyed, however simple it might be — like rice with ketchup covered with an omelette.