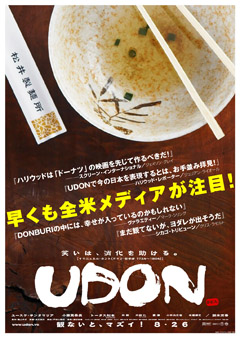 There’s nothing more pleasing (when you’re poor) than filling yourself up with a warm and savory bowl of noodles… udon noodles. This is the main ingredient and theme in Katsuyuki Motohiro’s Sanuki-city-noodle ode simply titled Udon — which happens to go great with curry, and Motohiro has a 2012 movie called Soup Curry (スープカレー). Random trivia!

Udon tells the story of Kosuke (Santamaria), a young man from Sanuki, Kagawa prefecture, with big dreams of becoming a stand-up comedian in New York and making people laugh. In his search, he ends up turning his back on his family’s tradition of making udon noodles, as per Kagawa tradition. Apparently (at least that’s what the movie states), while Tokyo has over 12 million people served by nearly 500 McDonald’s, Kagawa prefecture has about one million people all served by over 900 udon shops — which director Motohiro (being from there) researched and visited nearly 200 shops for the movie.

With dreams broken unwillingly, Kosuke returns home where he tries to avoid dealing with his grumpy noodle-making father, and meets a clumsy writer named Kyoko (Konishi), eventually setting out on the adventure of starting an udon craze that may or may not help his hometown.

There are actually a lot of great aspects in Udon, though unevenly so. The udon pilgrimage is quite interesting and might be the most charming part of the film — after all, the film’s title IS the name of the noodle. It’s tasty-looking, it almost feels like you can smell the noodle soups through your screen, and you might learn one or two things about udon. The overview of how a craze rises and falls is interesting and perfectly shows the surroundings of the matters the media deems “in/hot,” all included with festivals on the subjects and how people react to these events.

Nevertheless, it feels like Udon wanted to talk about too much. It’s not a movie merely on food, it’s a movie about a son’s relationship to his father — which is somehow moving — it’s about people’s relationship to the food they grow up with, your wishes growing up, and family traditions. Udon seems to also be about communities, the media, the good and bad aspects of a pop culture craze… and it all just seems very erratic, like the added animated action sequence, which was pretty pointless.

While Santamaria’s Kosuke borders a really fine line of being annoying, and there’s plenty of laughs in scenes with Konishi’s Kyoko — which don’t feel like they belong in the movie, but are still funny — it’s probably Fumiyo Kohinata who stands out as the good-hearted shy son-in-law. His role is short, there’s no major development from him, but there was something about his performance that was quite endearing.

Also, the Udon resolution is completely unbelivable. If it were that simple to get a perfect recipe in a couple of days, there wouldn’t be people spending 50 years in perfecting their technique. Then again, the movie isn’t about the perfect udon noodle soup, as they suggest, and maybe this isn’t meant to be the perfect food movie.