Ever since I began following Japanese entertainment, I noticed that many people (actors, actresses, musicians, and idols) appeared in magazines featuring food. Sometimes it’d be a regular snapshot of them holding a snack, but sometimes they would do a full-on feature on food. I never thought much of it, until I began gathering photos for this YAMYUM Food Blogathon post contribution.

As a Latin American-Asian, I love my food. I enjoy it when others enjoy it and I wish I could enjoy it like they are, so it’s always been a bother when  movies and series have food scenes where actors barely pick at their food. Think about it, most of the time it’s rare to see someone on screen that actually enjoys their food. It’s as if people on screen never eat (or take dumps, though that’s changed in some movies). Sure food is seldom part of the plot, but when food is required in a scene with people talking, it’s people picking at their food, never eating it.

Sometimes, people may chew on their food, but they never swallow — and that sounds completely wrong. Anyway, it’s something that bothers me as much as crying with snot running down your nose. It almost never happens!

This whole search for celebrity portraits started with this photo of Jesse Eisenberg by Martin Schoeller for last year’s GQ. I thought to myself, “Hmm… what other portraits of entertainers featured food?” 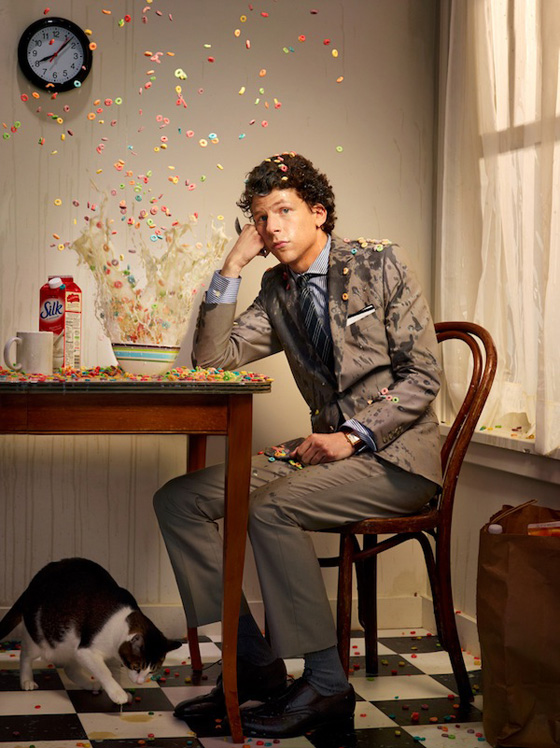 In my search of a variety of celebrity portraits — smartly Googled with the terms “name of celebrity food” LOL — I ended up finding some Tumblr diamonds. Tumblr always has diamonds. The first one, a very good source for this post was Fame & Food, and the other one was RDJ Eating Things (which is, in itself, gold AND diamonds).