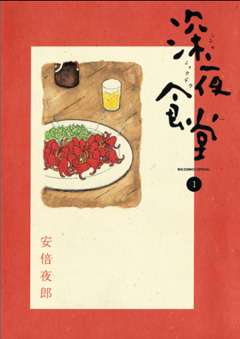 What do you get when you put a bunch of colorful strangers meeting after midnight at a rather simple restaurant where the chef presents you with a basic menu, but offers to prepare anything you ask for, as long as it is as simple as his establishment?

That’s what you get in Shinya Shokudo — roughly translated as Late-night Restaurant or Midnight Restaurant… maybe Late-night Eatery? — a still on-going manga series by Yaro Abe, which saw its ninth release last April.

The premise is extremely straightforward and without complexities. A man, known simply as The Master, owns a rather small eatery where there are four items on the menu — including the drinks. He opens every night at midnight and closes at 7am. Surprisingly, the place finds itself filled with a broad array of people that share their love for rather plain food and their life stories.

As an example, The Master finds inspiration in starting Yesterday’s Curry Day, when a bunch of his customers see him eating last night’s left-overs: cold chunks of curry over warm rice. He also sometimes serves instant ramen, a full plate of hot dog wieners shaped like octopus (staple fixtures in homemade lunch boxes), an assortment of rice-based dishes with liquids poured over them (either green tea or miso soup or a variety of stews), sandwiches, salads, etc. Each and every dish almost as a secondary character with its own background story.

Each volume contains about a dozen different stories of people that during the course of Shinya Shokudo end up as spectators of other people in the story, so its universe can be as rich as The Simpsons is, filled with characters that come up at some point of the story and remain in the background — often ordering the dish of the night whenever a new customer suggests one, until they decide to pop up as a nice surprise for the enduring reader.

Parent and child reunited through the flavor of a certain ingredient within a childhood treat, friendships healed with the trading of favorite meals, relationships started through the love of the same food, and broken just the same. Shinya Shokudo shows us the simplicity in which human bonds can be formed and developed in a few dozen panels. The style of the manga seems to follow this idea. Seldom colored, the series looks at times a bit… squiggly, making it a bit hard to actually distinguish one character from another — except for Mayumi-san (who stands out for her chubbier frame, wavy bottom hair, and glasses) and Marilyn who is always shown with her three-heart-shaped necklace.

The manga, however, is nothing transcendental, better suited for the casual manga reader who wants to read something different to a cyberpunk series, another mecha [1] franchise, and avoid the Shoujo [1] manga market. Not that Shinya Shokudo is devoid of any feelings, considering many of the characters complain of The Master’s cooking skills due to the “saltiness” of his food, which is obviously a result of the characters’ tears falling on their plates as they eat.

It’s also a great way to learn a little extra about food.

Shinya Shokudo currently has nine issues released, which you can purchase at HMV Japan. Each volume runs for about $10USD. Sadly, it remains unpublished in English, and only the first volume can be found translated by fans.

However, like the series, the fan project seems to be an on-going thing.