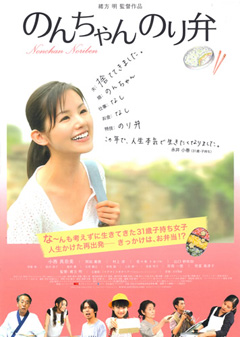 Actress Manami Konishi — who coincidentally also has a movie called Udon in her filmography — plays Komaki, a 31-year-old woman leaving her good-for-nothing novelist husband Noritomo (Okada), who lives on his parents’ paychecks. She’s had enough of him and serves him with divorce papers to sign, as she leaves for her mother’s (Baisho) place with her daughter, Noriko (Sasaki), who lives for one thing only: her mother’s handmade, simple but delicious Noribento.

Surprisingly, Nonchan Noriben isn’t a feminist movie that puts down its male characters to make our heroine shine. Sure, it may look that way at first, showing us all of Noritomo’s faults as a husband, but in the end, we are shown how faulty both of them actually were~ I mean, dude. The girl serves her husband divorce papers without warning! And it all ends with a comically dramatic show of hands between ex-husband and ex-wife… that I’m not entirely sure works, but it sure puts an end to the conflict.

But we’re here about the food. Nonchan Noriben‘s relationship to food is a rather special one, avoiding the showing of fancy food in favor of very simple dishes — like simple mackerel with sauce — and favoring healthy, balanced seaweed lunchboxes instead of fancy lunch menus. The movie even includes animated segments to explain what each different Noriben includes as ingredients… layer by layer.

Komaki’s own relationship to food is also interesting to watch, considering she’s not used to eating out and completely ADORES making lunchboxes for other people, until finally she realizes she can open her own lunchbox place! It’s actually halfway through when Nonchan Noriben finally gets a clear path of where it wants to head.

But the prize for best enjoyment of food has got to go to the adorable Rio Sasaki, who apparently was cast in the role of Komaki’s Noriben-loving daughter for her Noriben-eating abilities during the casting sessions. It’s so good to see people on screen actually enjoying their on-screen food with much gusto.